In the morning I had a long interview with Deacon Tom.  We were trying to integrate my "mission" with established ministries.

Retirement is inevitably a time of change.  You can approach it like a martial art where you guide and direct the momentum of that change to bring about the desired end.  Or you can passively let your time get filled up with fluff and other people's obligations and then be surprised that you are stressed and unfullfilled.

I present a puzzle for Deacon Tom.  I am still sour on people from working.  It is not that the place that I worked was awful, it is just that I ran into a set of circumstances that left me pretty twisted up.  I am unwinding but not all that fast.

Four and a half possibilities surfaced.
Time will tell.

The afternoon was filled with activities that are more typical of what I have been posting.

Mrs ERJ asked me to clear off the apron in front of the garage so the kids can play basket ball.  I have been lazy and let my projects "park" there.

So I installed one of the Barn Owl/bee hives on a pole.
The spinach seeds came today.  That was lightening fast shipping and I am very impressed.  Seed pictured here with an antler shed I found today under the Rosa rugosa as I pulled fencing around the new garden plot. 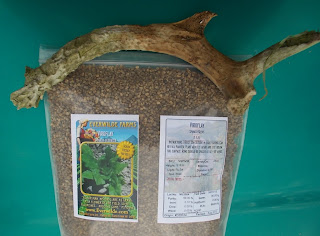 I had a dilemma regarding the planting of this seed.  The normal sequence is for me to till the dirt which makes the surface very open and rough.  The seed tends to percolate into the lows around the dirt clods.  Then the rain partially melts the clods which covers up many (enough) of the seeds.  I had already tilled, seeded and then it rained.

I opted to drag a pick-axe to open up some dirt for the spinach seeds.  The drag marks are between 3 and 4 feet apart.
I also put in the last end post and thought I would take a few pictures to give a feel for how I did it.  I am likely to get some feedback because I "plunged" the tip of a chainsaw into the post to make the vertical cuts and that is generally considered bad practice.
Boulders can heave out of the ground due to frost.  I think the phenomena is related to the shape of the sides.  I believe that making the sides vertical or with negative draft angle greatly reduces the heaving effects of frost.

I also made a few walks around the property with my loppers and the tin snips.  This summer has been incredible for the amount and regularity of the rain.  I am seeing two to three times as much growth as usual.  I was using the loppers to keep things orderly and to favor some recent grafts that were being bullied about by suckers from the understock.
Posted by Eaton Rapids Joe at 10:02 PM