I mixed up and broadcast some seeds for a cover crop on my new garden plot.

I mixed kale, turnip, green onions, daikon radish and lentil seeds.  I had been leaning toward dried peas but realized that you get a lot more lentils per pound and they are also very cold tolerant.

This is what the seed looked like after mixing: 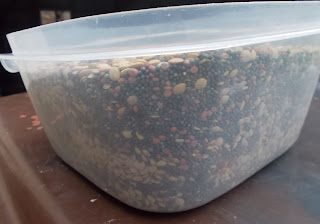 I have had the unfortunate experience of buying expensive seed and trying to broadcast it over a large area, only to find I had used most of my seed before I had covered half the area.  The work around is to bulk up the seeds enough so you can make broadcast passes from several different directions (East-West, then North-South).  I used 5 pounds of cornmeal to bulk up the seed. 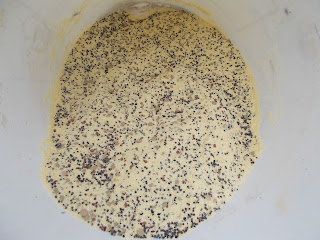 Corn meal provided great hand feel and made it easy to meter out.  The problem with corn meal is that it is so light that it does not throw as far as the seeds and, consequently, you are deprived of that feedback.

My favorite bulking agent so far is coarsely ground limestone.  Sand is too dense and the seed wants to separate out.  Corn meal is too fluffy but mixes very well with the seeds and has great hand feel.  Limestone seems to be the happy medium.

I was concerned that I would be feeding the birds, but the ground is so rough and lumpy that the seed just disappeared.

Now it is time for me to start praying for rain.
Posted by Eaton Rapids Joe at 8:02 PM