Reloading military brass has many quirks.

Because this brass was fired in a Squad Automatic Weapon (machine gun), it stretched beyond the specification.  This brass was 2.022 inches after forming.  Maximum allowable is 2.015 inches. I have a couple of simple tools that takes it down to 2.006 inches.  It is not a bad job if you have a cordless drill to power the operation.

Military brass also has the primers crimped into their pockets.  The primer is the "cap" in the cap gun.  It is a small metal cup with a tiny dollop of sensitive compound that converts the mechanical impact of the firing pin into a flame that ignites the gun power.  The primer must be removed and then the crimp must be machined out before the reloader (me) can reliably insert new primers.

And that was today's frustration.

It was a two part struggle.

I have two flipper-doodle hand primers.  The one that has the most mechanical advantage is the RCBS (a brand name).  Guess which one I could not find.  Yup, the RCBS.  So I tried to use Brand L.  A huge struggle due to the short trigger.

Finally, I got so disgusted I took a break and looked until I found the RCBS.  A big improvement in effort but I was still having a problem.

The second struggle was a little weird.  It turns out I have two primer pocket reamers.  Both from the same manufactures.  The first one I used seemed to be cleaning up the pockets but this is what I was getting about one case in five.

The savvy reader will recognize that these are not Winchester LRP.  That is because I tried two different brands of primers to see if I had an issue with the primers.  Winchester LRP are known as "hard" primers, so I tried Federal primers.  I was lucky these did not go BANG as you can see the anvil reading through the metal cup in the center of the primer.  Both Federal and Winchester seemed to have the same failure rate.

This is a painful failure mode because once the primer starts to seat you are committed.  You cannot pull the shell out of the tool until the primer is completely flattened out.  The tool is not really made to mash the primers into a pancake so it takes multiple grunts and spinning the shell around to expose mangled primer to the press-pin.

During a short recess I bumped a box in my reloading room and a second primer pocket reamer appeared.  It had a bright orange handle and looked much newer than the wooden handled reamer.  I took one of the cases I had already reamed and gave it a couple of turns.  Dang!  I could feel it bite in and I saw a couple tiny feathers (technically called chips) of brass come off.

Just for those who have never seen the business end of a primer pocket reamer, this is what it looks like. 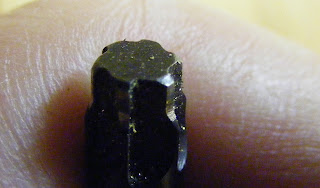 I threw the wooden handled primer pocket reamer in the trash.

What is most frustrating to me is that I now have a lot of brass that is mixed.  Some/most of it is properly reamed.  Some of it is not properly reamed.  I need to keep track of this batch of reloads and re-ream them before I attempt to prime them again.  I may end up reddening the bases with a sharpie.
Posted by Eaton Rapids Joe at 10:29 PM