The post on foreign languages generated some off-blog chatter and a special request.  The special request was an essay on fonts that are "dyslexic friendly."

According to the British Dyslexic Association, researchers learned that dyslexic readers like:

They identified Ariel, Comic Sans,  Century Gothic, Verdana and Trebuchet as being the friendliest "traditional" fonts.  They have the following to say about which of these fonts is "best":

Some dyslexic people have expressed strong feelings about typefaces, but there is no agreement apart from saying it should be sans serif. This document and all B.D.A. tech pages are in Verdana.


We asked dyslexia forum members. Only a few people responded. So it may not be a burning issue for most dyslexic people. It is likely that line length, line spacing and font size are just as important. Some loved Comic Sans, but others hated it. Some liked Century Gothic and teachers like purchasable Sassoon. On-screen and print preferences may differ.


There are also some fonts that are designed specifically for readability by people with varying degrees of dyslexia.  Those fonts include Lexia Readable, Open-Dyslexic and  Dyslexie. These fonts are characterized by an almost calligraphy-like appearance.  Many people with dyslexia read words by their shape, or more accurately by the shape of the blank space around those incomprehensible squiggles.  The dyslexic friendliest fonts have heavily weighted bases.  Visually, they are weebles.  That reduces the likelihood of a "pitch induced inversion error".  Several of the fonts have lumpy "b, d, p, q, g" and so on.  They almost look like gravity challenged pottery.  The goal of the font designer was to amplify discrimination not to meet an artificial "aesthetic" rule-set.

On a lighter note


One of my friends, one who has the words "Doctor" and "Medicine" as part of his formal honorifics, sent me the following chart.  This chart is used to train students in the art of writing prescriptions to the exacting standards of the American Medical establishment.  I am withholding his/her name because one would normally have to pay tuition at a Medical School to be privy to this information.  There would be repercussions if I revealed the doctor's name. 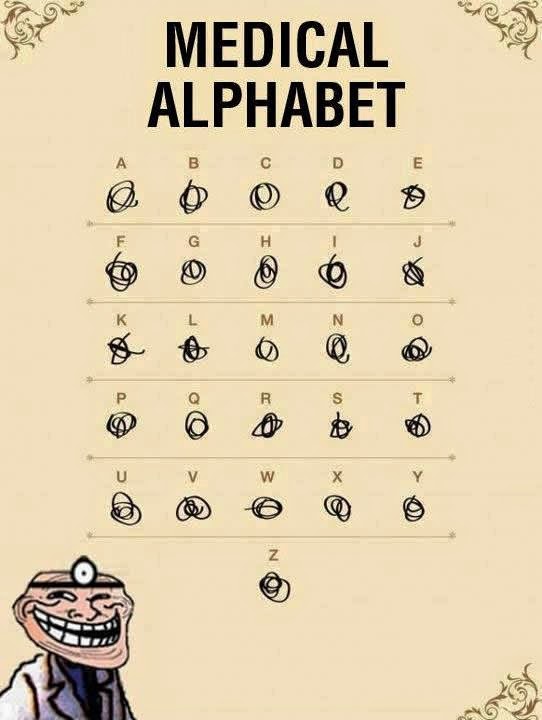