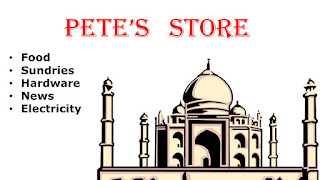 La-Loyd and Wesley felt like they were getting the old run-around.

Denny directed them to find a farmer anywhere in Kates Store and buy a load of grain.

They followed Bunker Highway to Canal and then turned north. Wesley was driving and La-Loyd was reading maps and riding shotgun.

It became apparent, in a half hour, that they had guessed wrong.

They turned south and hit the eastern corner of Kates Store.

Asking questions, they finally found Farmer Don who refused to sell them grain.

“You will have to talk to Kate. She holds my account.” Farmer Don said.

“Are there any other farmers who have grain?” La-Loyd stuttered.

Farmer Don did not feel compelled to point out that Farmer Ken and his wife were visiting family in Pray Church.

After waiting in the shade of a big silver maple for two hours, La-Loyd and Wesley stopped some kids walking down the gravel road. That is when they learned about Farmer Earl.

Farmer Earl told La-Loyd and Wesley that the three farmers in Kates Store all kept accounts with Kate. If they wanted grain they had to go to her. Make their best deal with her. She would write out a bill-of-lading which they would present to the farmer who would gladly supply the product and amounts specified.

They took the offer. Kate whipped out a couple of pre-printed contracts and filled in the blanks. "What is the name of the horse?" she asked, pointing at the mare that was closest to her. Wesley said "Her name is Suzie" and Kate filled that in.

Suzie was not in the first blush of youth but was straight of back, sleekly muscled and  had a glossy, chestnut coat.

Wesley signed the contract and Kate had Rick and Mz. Sheridan witness it.

La-Loyd took notes on how Kate did things. La-Loyd’s best guess was that she collected a 30% skim on the transaction and he fully intended to copy that model once Blastic’s fields started producing.

It took them nine hours the first day. La-Loyd estimated that it would take three hours once they got settled in.

Blastic was livid when he learned that Kate "Jew-ed him down" to 500 bushel of corn. With nobody to buy hay from, his horses had eaten down the pasture to nubbins and he was feeding them two bushel of corn a day. That did not even start to count the "residents" he was collecting. In all likelihood, he would have to put several of his horses up for collateral before his corn crop came in.

It also put the pressure on Blastic to put up a really large hay crop, to reduce his dependency on corn from Kates Store to feed his horses.

Blastic’s idea was to kill two birds with one stone. He intended to drive the Shah brothers out of business and keep his indentured servants in debt. He opted for the “Owe my soul to the company store” model. In lieu of currency, Denny paid his workers with common washers. Quarter-inch washers were worth an hour’s work. Three-eights inch washers were worth a half day’s labor and a half-inch washer was worth a ten-hour workday.

The families barely made enough money working six days a week to pay for seven days’ worth of food. Blastic docked them pay for countless infractions from broken tools to taking too long to get a drink of water.

Blastic directed La-Loyd to take over the Satish Shah’s original store. It was well placed and had large buildings.

Satish and Prakash were exquisitely aware of Blastic’s every move.

Blastic could subsidize the freight and undercut them on price but they did not have to make it easy for him.

Prakash was currently insulated from Blastic’s predations because nobody was going to carry a hundred pound bag of grain three miles to save a few pennies when they could buy it right next door for just a little more. The handwriting was on the wall. If Blastic was successful at putting Satish out of business, there was nothing to stop him from opening another store right next to Prakash.

Prakash took inventory of the skills and talents available to him. He found that one of his customers, one who had a balance on his books, was a printer and commercial artist. The artist was apologetic that he only had red, black white paint to work with.

Prakash made some executive decisions. He heard through back-channels that Blastic was making an issue of their immigrant status and their religion.

Prakash was a pragmatic person. He decided that it was time to officially change his name to “Pete” and that Satish should henceforth be known as “Steve”.

Nobody would ever mistake them for native born Americans, so Prakash decided that what cannot be hidden should be highlighted.

The artist made two, four-feet-by-eight-feet signs. The signs were almost identical: White background, the silhouette of the Taj Mah in pink and “Pete’s Store” or “Steve’s Store” in large, crimson letters that could be read from a hundred yards away. There was an arrow at the bottom pointing up the drive to the actual store.

“Steve” noticed an instant up-tick in traffic the day he leaned the sign against the tree in front of Warren Wood’s place. Folks new there was a store in the neighborhood but couldn’t figure out if it was La-Loyd’s place or somewhere else.

La-Loyd did not work very hard at selling. He knew he had a captive audience in Blastic’s workers. Nobody else took washers as currency, for instance. He also undercut Steve’s prices by 20% but he did not grind the grain. He picked up about a third of the non-Blastic business because of his prices. Most of what he sold was fed to animals.

La-Loyd’s business model was to throw a long shadow. La-Loyd’s store was seen as selling animal food...or food for people in the most dire of straights. Steve’s store was seen as more up-scale and had a much larger range of products available. Steve sold fish hooks, charged batteries and distributed news letters.