...and they want to run the entire US economy... 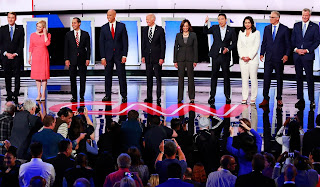 As Politico summarized: “There are two paths to qualifying for the debate stage: breaking 1 percent in three polls from pollsters approved by the Democratic National Committee, or tallying 65,000 unique campaign donors, with at least 200 donors in 20 different states.”


That has the mob of Democrat candidates throwing money at mass media and social media trying to exceed the magic number of "grass roots" donors.

And they all promise they will make healthcare cheaper and to rejuvenate the economy.
Posted by Eaton Rapids Joe at 3:46 PM