Eight repetitions to solidify a habit


Mrs ERJ is a firm believer that it takes eight repetitions to convert a desire into a habit.

She is fond of telling new mothers, "Don't decide your child does not like a new food until you have served it eight times."

Or, "They will fight you on a new chore until they have done it eight times."

Running
I almost stalled out. I almost did not go for my seventh run. 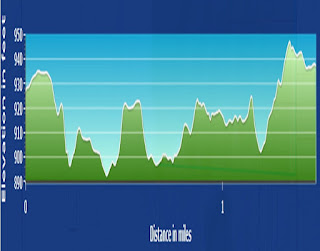 This is an elevation profile of half of my 2.5 mile run. I usually run the 2.5 miles and then walk a half mile of cool down.

The steepest portion of the run is almost a 10% grade, that is, ten feet of rise in 100 feet of road bed.

The other half of the run is relatively flat.

For those who read the Seven Cows series, this is what Kates Store looks like. Half with interesting elevation. Half boring.

I got cocky
I had been running the 2.5 miles and it was getting easy.

I decided to make it interesting. Rather than grind my way through the 2.5 miles at the same pace, I decided to "stress" my body by running certain segments faster.

Running downhill, for instance, stresses different muscles than running uphill. You can make your work-out significantly different if you speed up your downhill glides or speed up your uphill grinds.

The downhill glides beat the snot out of the fronts of your thighs.  Uphill grinds beat up your hamstrings, calves and gluteus maximii. Sprinting works your calves and hip flexors. Heal strikes work your shin muscles. And so on.

"Interesting" is rarely synonymous with "smart". It was the accelerated downhills that were my undoing.

I was a hurting puppy. I was dreading going for the next run.

But, lucky for me, I put myself on the hook with my readers. I went out and did it.

Number seven is in the bag.

I am looking forward to number eight. Then it will be a habit and, hopefully, it will carry me along.
Posted by Eaton Rapids Joe at 8:08 PM