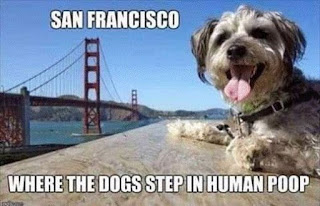 How many homeless people live in San Francisco as a percentage of the base population? Any guesses?

As a percentage of California's 1930 population, how many people left Oklahoma (one state) and migrated to California during the dust-bowl?

8% is the correct answer.

What percentage of mortgages were "underwater" during the depths of the Great Recession?

9.1%. Bear in mind that some people think that the "Great Recession" was a warm-up act for the next one since inefficient businesses and cities were not allowed to fail, debt increased and there is still an enormous overhang of derivatives.

Additionally, there are countless travel-trailers parked beside garages and behind barns throughout the Rust Belt. All it would take to turn them into temporary apartments would be LP in the tanks and an extension cord.

Yes, I know some homeless are mentally ill and "want" to live on the streets. For a while we shared a "homeless" girl with the town of Charlotte. Frankly, she had a home but her parents said she could not live there as long as she did illegal drugs (opioids, in her case) and hooked for a living. I haven't seen her for a while and heard a rumor that she had O.D.ed in the restroom of a fast food restaurant.

Seriously, in your estimation, would your community be able to handle 8% of the residents being turned out of their homes more gracefully than San Francisco is handling their 0.8%?
Posted by Eaton Rapids Joe at 9:03 AM