One of yesterday's chores was to help shepherd mom-and-dad to their six-month doctor checkup.

Dad's dementia is at the point where he wakes up during the night, cannot process AM vs PM, remembers something and becomes agitated. Once agitated, he starts walking.

At times, his memory is to the point where simple, Catholic prayers he has been reciting by rote since age three take unexpected turns.

It was the consensus of the family that we needed some kind of pharmaceutical help with the agitation. Mom and dad are alone about four hours a day. There is little mom can do if dad goes "walk-about".

And then the doctor said...
Deal with the triggers.

All the normal anti-anxiety drugs have high rates of severe side-effects, including the opposite effect of expected and increased memory loss.

The doctor was incredible. She gave them over forty minutes of her time which undoubtedly drove the bean-counters bananas.

She shared that her own mother had been institutionalized for dementia. When visiting her, the doctor observed NO LOCKS on any of the outside doors.

She confronted the head of the home and the head-master said, "They don't walk without a reason. We find the reason(s) and address it. If they don't like runny, scrambled eggs then we serve them dry scrambled eggs or oatmeal."

She did, in the end, write a script for a very mild, short-acting anti-anxiety with the caveat that if anybody administered it to dad, they needed to be committed to sticking around for AT LEAST two hours to ensure the drug did not increase dad's anxiety.

Dealing with Triggers
Trigger: Dad is agitated when non-family members provide care. They are strangers.
Countermeasure: "Selfies" of non-family caregivers with their names and work shift listed below the photo. To be mounted on the refrigerator. I expect we will be mounting our own pictures on the fridge within a month.

Trigger: Signs on doors telling him he cannot go upstairs, into the basement or outside.
Countermeasure: Remove signs. Replace with greeting cards telling dad we love him. 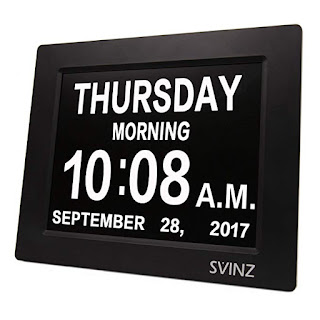 Countermeasure: Dementia clock for his bedroom

Trigger: He sleeps with his dog in his bedroom. Dog wakes up and makes it hard for over-night person to get any sleep. Caregivers had been discussing "managing" the dog.
Countermeasure: Leave the dog alone. "Honey" is just part of the job. Caring for the dog is the same as caring for dad.

That is the first pass at removing triggers.

Nebulizers
The nebulizer issue is a tangled mess. One of the caregivers is of the impression that dad can make it go faster by breathing more deeply. Every time she walked through the dining room, she "encouraged" dad to breath more deeply. Dad heard that as being yelled at.

When the nebulizer did not go any faster, the caregiver assumed it was because Dad was slacking and needed "more encouragement". She also directed the rest of us to "encourage dad".

The irony is that the vaporizing unit is open on the end. Whether dad is inhaling or not, the air pressure at the top of the medicine bowl is going to be so close to ambient air pressure that the finish time will be within seconds. In my engineering judgement, the speed of the nebulizer is 99.9% geometry and air pressure from the compressor unit.

The doctor was fine with our getting dad a faster nebulizer. She used straightforward medical terminology, "I have no medical evidence to suggest that speed of delivery has any therapeutic benefit or non-benefit for your father. Therefore, I consider them fungible."