There was a golden period in American technology education between 1930 and 1965. It was very hands-on and applied.

Then, the academics got their hands on it. Instead of recipes they wanted students do derive processes from the potential energy states of electron orbits.

I was lucky. It was possible to pick up hard-cover books from that golden age...1930-1965...at garage sales for pennies on the dollar.

One of the processes I learned about was case hardening.

Case hardening is the process where a part is fabricated using mild, malleable, easy-to-work-with grades of steel and then to create a very hard, very strong surface on the part by transferring carbon to the surface in a special furnace or retort.

For example, you might bend a piece of soft iron wire into the shape of a fish hook. You might smash the business end flat with a hammer and then cut the point and barb with a cold chisel.

It looks like a fish hook but would straighten out if you ever tried to use it to catch a fish. 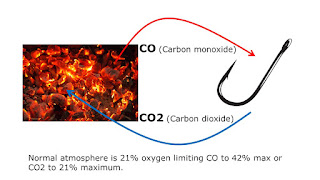 But if you were to case harden and heat treat it, it would be a perfectly competent fish hook. Of course, you wouldn't bother for a single fish hook but you might for a batch of several thousand.

Many of the old formulas for case hardening were real eye-of-newt, wing-of-bat affairs. I rarely paid that much attention. 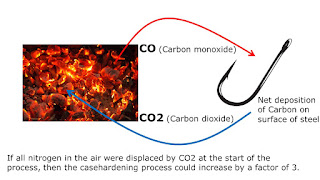 It was only later that I realized that the inclusion of ground limestone or bone char was to create CO2 at approximately 1500F which purged most of the nitrogen from the atmosphere in the retort and accelerate the transport of carbon.

How the heck did those old geezers ever figure that out?

I suspect they tried many different kinds of char and found bone char worked much better than other kinds. Then somebody noticed that bleached bones look like limestone and mixed cheap charcoal and cheap ground limestone and found it worked even better than expensive bone char.

But that is speculation. The point is that mixing soft iron parts, charcoal and ground limestone in a vessel and heating to 1800F works very well, almost to the point of being indistinguishable from magic.