The economy of privilege

This is very similar to how cell membranes pump potassium and sodium ions and conserve pH.

The Economy of  Privilege
The economy of privilege works in a similar fashion.  Privilege travels in one direction and it is counter-weighted by reciprocal responsibilities, obligations and accountability.  Sometimes the word "authority" is used in the place of "privilege".

Lets look at one link of the chain and a very specific case: The captain of a ship considering whether he can grant his sailors shore leave.

The Captain was given a mission by the Admiral.  He was entrusted with his ship and crew.  In return for being given the privilege of acting as captain he has an obligation to complete the mission and return the ship and crew in good condition.

The Captain must consider whether the advantages of shore leave; stress reduction, better focus in the long term and better employee retention - outweigh the costs.  The costs being leaving the ship under-manned while in port, potential loss of crew, exposure to STDs and foreign jail cells and a crew that might be hung-over the first day back.

If the Captain decides to permit shore leave then the sailors are under obligations to not put the Captain's mission and obligations at risks.  They accept the conditions that will minimize that risk.  That is, that they can be found and ready to sail in the morning. 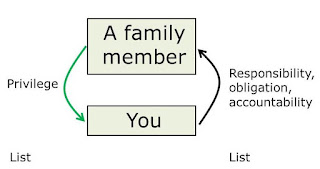 Our first exposure to the economy of privilege is in the family.  In our younger years we receive privilege.  As we mature and assume adult roles in the family we dole out privilege.

Seventh and eight grade are a very tricky time as adolescents transfer allegiance from their family to their social group. It is a trying time for parents as our kids seem to lose 30 points off of their IQ.

We should not be surprised that their social skills are primitive.  They are, after all, young.

Their allegiance to their new social group is absolute and uncritical.  Deviations from the norms are punished with banishment.  It is a brutal time.

Ideologies, institutions and movements that pander to adolescents are likewise primitive.  They are absolute and completely ruthless in weeding out any independent thought.  Petrified by the possibility of being tossed out of the fortress, most young people comply.  Without the stress of challenges and the messiness of reality, the adolescents' minds becomes trapped like a bugs in a drops of amber: Comfortably fossilized. 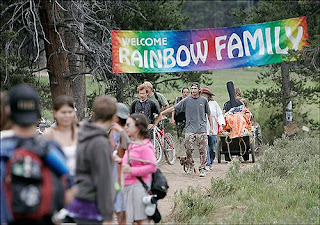 Shielded from the messiness of reality the ideologies, institutions and movements become brittle, unable to respond to changes.  A few pathetic "True Believers" hang on.  The last few Shakers.  Small enclaves of New Age believers listening to a Thetan channeling through a monk.  But most of the former believers slink off when the cognitive dissonance becomes too painful.

Ah, the earnestness of young people.  You know, the ones who shake their fingers at us oldsters and deign to tell us how to live our lives in the minutest detail.  They crave authority but failed the "earn" part of earnest.  They want the privilege but refuse the web of reciprocity.
Posted by Eaton Rapids Joe at 6:44 AM