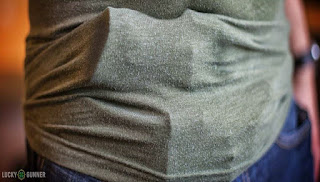 I was at a Christmas party where there was a concealed carry "fail".

It is ironic that open carry requires that some portion of the firearm be visible at all time while concealed carry requires that the weapon never becomes visible.  The legal thinking is that revealing a "concealed" weapon opens up the possibility of "Brandishing", a felony. misdemeanor.  "Brandishing", for those who are new to this kind of thing is often defined as "intentionally displaying a weapon in an intimidating or threatening manner."

You can take a toy gun into a bank and be guilty of "Brandishing".

I strongly suspect that three of the people at the party were carrying.  Heck, it could have been more.

One of the mothers who has young children somehow got wind of it afterward.  Facebook?

Her primary concern was negligent discharges.

Alcohol
She accused the folks who were carrying of drinking while carrying.

Frankly, I did not see any of the ones I thought were carrying so much as touch an empty can of beer.  If you were trained in Michigan than you learned that alcohol and concealed carry are a no-go zone.  Blowing anything that makes the needle quiver is instant confiscation of your firearm and a MINIMUM of a one year revocation of your Concealed Carry License.

The hostess attempted to find a middle ground.  She was fine with guests bringing their handguns as long as they locked them in the trunk of their cars.  I am not sure if that is going to be "OK" with those who carry.  It will be their call.

The Quandary
The quandary is that folks who are not "into" firearms are unaware of the other dimensions of "middle ground".

One dimension within the middle ground is for those who are carrying to have a better concealment system.  This would not have ever become an issue if one of those carrying had not "printed".  Crass?  Maybe.  But why would you rub somebody's nose in the fact that you are carrying if you knew it stressed them?  A corollary of this is to not mention that you concealed carry on social media.  Any social media.  Ever.

That is water over the dam for this group of people but something to keep in mind if the issue has not arisen at your Christmas parties.

Another dimension within the middle ground is to require that those who are carrying "at my house" to use a holster with a good "secondary retention feature".  The word picture from the concerned mother involved Billy-Bob rough-housing with her child, the firearm tumbling out and, in the chaos, discharging.  Even CNN attests that holsters that have secondary retention features are effective at securing guns from prying hands.

Prosecutors say Tsarnaev and his older brother, Tamerlan Tsarnaev (Boston Marathon Bombers), killed Collier because they wanted his gun. But their efforts to take it were thwarted by a safety holster.  -Source

Trust me, folks who carry are always looking for an excuse to buy another holster.  That would not be an imposition.

A third dimension within the middle ground involves adding a degree of separation.  That is, carry the gun unloaded but with the magazine (or speed-loader) in a pocket on the other side of your body. The chances of a ND are as close to zero as math acknowledges.  A firearm without bullets is a rather inefficient hammer.

The reason these are identified as dimensions is because they are fully independent.  The host or hostess can mix and match any of the three dimensions to get the level of confidence they wish.

Just my thoughts.  Your mileage will vary.

Note:  Some corrections were made regarding "Brandishing" based on input received by email.  Incorrect info was struck and corrected information was underlined. That is why formal classes are valuable and why lawyers are worth consulting...
Posted by Eaton Rapids Joe at 7:04 PM