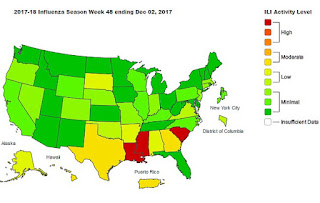 According to The Daily Mail the flu season is off to a fast start and will be a bad one based on data from the Southern Hemisphere.  Australia, for instance, recorded 2.5 times as many flu cases as the average year.

The H3N2 strain that is the major player this year mutates rapidly and the H3N2 component in this year's vaccine is a dubious match for what is out in the field.

Another factor is that fewer people received the vaccine so there is less "herd effect".  That is, people who are not immune are fire-walled from the chain-of-transmission if a critical mass of people around them are immune.

The question of whether the H3N2 component from earlier year's vaccine is a good match was never addressed.

Hand Sanitizers
I just ordered a batch of hand sanitizer that has Benzethonium chloride as its active ingredient. Benzethonium Chloride is particularly effective against enveloped virus like influenza.

Not only does it not dry out the skin like alcohol, it has residual protection against the flu after it has dried.

In addition to its highly effective antimicrobial activity, benzethonium chloride contains a positively charged nitrogen atom covalently bonded to four carbon atoms. This positive charge attracts it to the skin and hair. This contributes to a soft, powdery afterfeel on the skin and hair, as well as long-lasting persistent activity against micro-organisms.

The difference between a severe case of the flu and a mild case probably depends on two things.  One is the state of your immune system.  The other is the initial dose of infective agent you receive.  If you receive a mild dose then it takes multiple generations to build numbers and that buys time for your immune system to get in the game.
Posted by Eaton Rapids Joe at 7:02 AM