Immigration: Can the economy "grow" with a static population?

Conventional wisdom holds that our economy cannot grow without a growing population (and modest, monetary inflation).

Kunstler, Homer-Dixon and Dimond suggest that the conventional wisdom only tells half the story.  They recast history and re-tell it as cycles of resource discovery, exploitation, depletion and collapse.


An expanding population is desirable up until Hubbard's peak.  They are needed to cut mine shoring, lay rail, drill wells, weld pipeline and the like.

People are funny.  We are complacent as long as our prospects seem to be expanding.  It is easy to advance in a growing organization.  If it is growing quickly enough, an employee only needs a pulse and to have not embarrassed the organization in order to become a manager.  Peace is easy to maintain when everybody buys into "Tomorrow will always be better.  Don't rock the boat and screw it up!"

That up-draft slams into reverse when organizations start down-sizing.

Kunstler in particular, posits that massive, civil strife is inevitable as population over-shoot collides with the grim mathematics of resource depletion.

Kunstler contends that much of our schizophrenia is due to the piece-meal, gut-level realization of Hubbard's peak and the implication.  The citizens of the Middle-East and Latin America are more attuned to where we are in the exploitation-depletion cycle and they are bailing out.

The conventional wisdom in the west still subscribes to the growth model.  We believe that we are still in the expansion stages.  This is supported by our fantastic material wealth; wealth we accrued not due to our intrinsic abilities or growing resource base but due to our ability to "pull" resources from less robust economies. 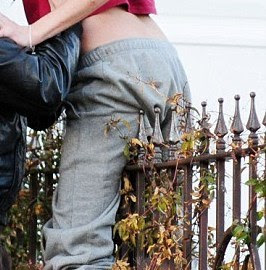 We are caught like a small boy astraddle a picket fence.  Half the world is preparing for collapse and Armageddon.  The other half squanders wealth in enormous displays of conspicuous consumption (Example: "Poor people" paying exorbitant prices for branded apparel.)

Perhaps the more germane question is not "Can the economy 'grow' with a static population." but "How can peace be created in an environment of static or diminishing prospects?"
Posted by Eaton Rapids Joe at 10:44 AM