College is not for everybody 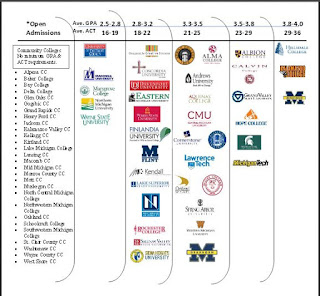 The leftmost column is a list of schools, nearly all community colleges, that have open admissions.  All you need is a pulse and a check book. The bins become increasingly selective as one moves from left to right.

One thing that becomes notable when researching universities is that the more selective universities have significantly higher four year graduation rates.  The less selective universities claim that less prepared students must take remedial classes that do not count toward graduation.  In effect, their four hundred meter race begins one hundred meters behind the starting line.  This argument is a bit thin because there is no huge jump in graduation rates when looking at five or six year time horizons.

I chose the public university that is closest to Eaton Rapids from each bin.  US News and World Reports was the source of four year graduation rates.

Lansing Community College is the closest community college and has a graduation rate of 8% and a transfer rate of 27%.  LCC does not publish ACT scores for its population so it is not plotted in my graphic.

Clearly, the cheapest course is to take as many credits at the local community college that will transfer to a four year public university.  Since universities are reluctant to accept outside credit for "remedial" classes, there is a darn good chance you can finish the last half of your degree in 2 years...even less if you attend summers.

It would be interesting to retest community college students after two years of college.  In theory, there should be huge growth in "college readiness" because they will be transferring in as Juniors.  In practice, "college readiness" is probably a combination of lack-of-preparation and habits that make some students resistant to learning.  Community college can ameliorate the lack of preparation but is not the best tool for fixing ineffective habits.

Being able to finish one's college education quickly is important because of the time value of money.  $40,000 earned this year is worth far more than $25,000 spent this year and $40,000 earned next year. And even though times are tough and most people are not thinking about pay raises, it is important to remember that time-in-grade plays a part in promotions and raises.  It is also sometimes used as a tie-breaker in lay-offs.

Perhaps the focus should be on the universities admitting large numbers of full time students who do not graduate in four years.  Did those universities fail those students?  Were they admitted so their ability to take out student loans could be strip-mined by the institution?