I am fortunate to live about twenty-five miles from a test planting of hybrid poplar.

The topic of hybrid poplar is divisive among tree people. It is a niche product. It is very, very good at what it is good at but fickle about everything else.

Think of it as a high performance, 2-stroke motorcycle engine. Give it anything less than the best gas and best synthetic oil and the performance suffers. Let the RPM drop below 7000 RPM and you would be better off with a bone-stock Honda. 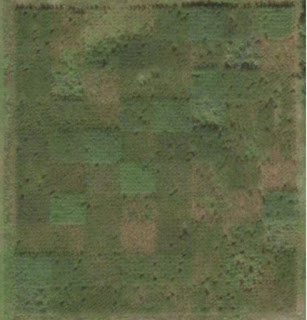 The test planting has sixteen clones or cultivars in five replicates. 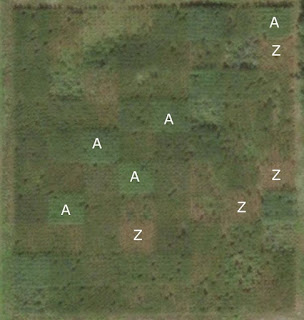 Some of the replicates are easy to pick out. 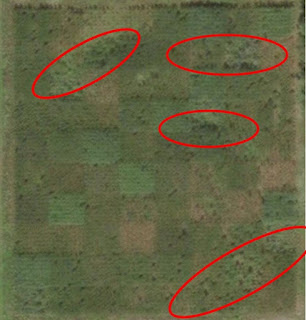 The darker spots are where a tree died and you see the shadow of the tree to the left. The areas of highest mortality seem to be streaky. "No Trespassing" signs are posted and I did not walk the planting. Those could be ridges. Those could be low areas. 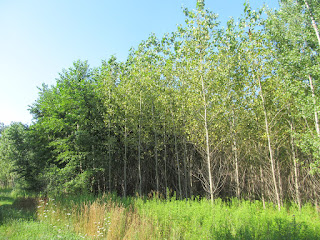 Looking along one edge in early August you will see very large differences in the leaves of the different clones. Some clones are sparsely leaved and let dappled sun hit the forest floor. Other are very densely leaved and catch every ray. 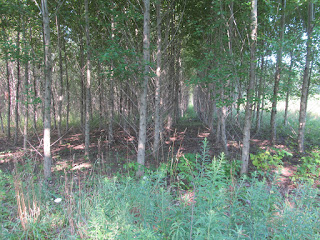 I was intrigued by all the little whisker branches on this clone. If that mechanism could be identified and transferred to fruit trees it would be very useful for size control.

One of the conclusions was a little bit surprising. The interactions between genetics and environment is almost twice as large as the pure genetics component.

That suggests that selecting a clone based on the performance in a nearby state might be misleading. After all, that conclusion was drawn based on the variation between sites within ONE state, Michigan.

Reasonable expectations for yield
The benchmark clone, NM-6 (A cross between Poplulus nigra and Populus maximowiczii) produced 29,000 pounds of dry matter per acre over a five year rotation in Albion, Michigan. Annualized, that is just a skosh less than 6000 lbs dry matter per acre. That is the equivalent of 300 gallons of heating oil a year, give or take based on how well dried the wood is when it is burned.

The best performing clone was NM-2, a "sister" of NM-6. NM-2 has less disease resistance than NM-6 and a planting of NM-2 and NM-6 would not substantially increase the robustness of the system.

There were other clones planted in Albion, DN-177 and DN-170 that produced 98% and 95% of NM-6 respectively. "DN" clones are crosses of Populus deltoides and Populus nigra. Populus deltoides is the common, Eastern Cottonwood which is well suited to wide swaths of the eastern half of the United States.

Yawn. Been there done that
Maybe you tried hybrid poplar and weren't very impressed.

I did. They were OK but nothing "SUPER". I used the most recommended clone of the day, DN-34 (Imperial aka Carolina) and the more exotic DN-17 (Robusta). DN-17 was notable for arrow-straight trunks and both clones quickly over-topped native hardwoods but they still did not seem "miraculous". How do those old standards compare to NM-6 and DN-177?

Defensible recommendation
Plant several hybrids with different species composition. Including the species Cottonwood in the mix is an option. If choosing from local Cottonwood trees, look for apical dominance and side branches that leave the main trunk at right angles.

Mow vegetation the fall before planting.

Frost-seed red clover in late winter before planting. Red clover will add nitrogen and not be excessively competitive with the new trees.

Plan rows 10' apart with cuttings 6' apart within the rows. Ten feet between rows facilitates machine movement. Seven hundred trees to the acre will result in the trees shading the ground in a couple of years and suppressing competition.

Plant clones in blocks or strings so you can get a clear evaluation of what works best on YOUR site.

Rough mow the site in mid-June to knock down tall grasses.

Plan to clear-cut at 4-to-8 years. Clear-cutting removes diseased stems and keeps the stools juvenile. The wide range of cutting intervals is driven largely on the health status of the planting. Another consideration is to cut at small enough of a diameter so you can avoid having to split wood to fit it into your wood burner!

Cut the stumps at 4" the first time. They will respoutl