Be Prepared: Marry a Girl Scout 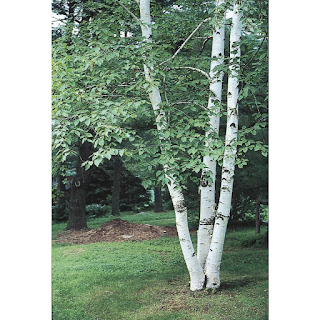 Mrs ERJ gives me free rein over the outside. Her only condition is that I not cut down HER clump of paper birch.

As a girl scout she learned about the use of birch bark to start fires. Little known fact, the Genus name "Betula" is Greek is the same root as bituminus or coal tar. To give one more hint, kerosene was once known as coal oil.

You never know when you might need to start a fire.

Her other condition was that it be planted outside a window so she could admire it...and so she would notice if it contracted Poulan disease.

Our clump doen't contain three stems. Nope. I am an under-achiever. We only have two stems.

One of the stems is growing just fine. I think it is a seedling of Whitespire Senior. When the variety "Whitespire" came out it was pitched as being an exotic Asian species that was magically immune to the Bronze Birch Borer. Sadly, the Bronze Birch Bore does not restrict its damage to birch trees cast from bronze. Its tastes are nearly universal.

Genetic studies revealed that Whitespire birch was, in fact, common-as-dirt Gray Birch (Betula populifolia). Things being what they were, the name "Whitespire" was assigned by the studbook in the sky to Betula platyphylla and the selection of Gray Birch formerly known as Whitespire was looking for a new name because we cannot confuse people, can we? The best they could do was "Whitespire Senior".

Alas, the other white barked birch is not Whitespire Senior. I have no clue regarding the species but I can attest it does not do as well in our front yard as the Whitespire Senior seedling.

Regardless, both specimens look enough like Paperbark Birch to keep Mrs ERJ happy. It is not likely that she will count the chromosomes tell the difference.

Head fakes
When researching birch trees, lo these many years age, I learned that there are several birch species that are relatively Bronze Birch Borer resistant.

I trolled them by the ever wise and lovely Mrs ERJ and she always shook her head "No!".

The problem was that they did not look like the Paperbark Birch of her youth.

I was looking at River Birch (Betula nigra) trees with the intent of stealing seeds. Yeah, I am that kind of guy. Don't leave your catkins unattended at night.

One of my 2019-20 projects is to plant trees in some wetlands that have been denuded of their ash trees.

River Birch is not known to be native to Michigan but it is found in northwestern Indiana. River Birch is one of those "relatively resistant to BBB" species. It is also tolerant of wet feet. The RIVER part of River Birch is a hint.

I looked high-and-low. I found many River Birch as it is a popular landscaping tree but nary a catkin.  And then I learn that its seeds ripen in June. It is the only birch that ripens it seeds so early.

Then I learned of another birch, Betula lenta, that is considered very resistant to deer. I looked high-and-low and there is no information about how happy it is in wetlands.

Even if there was information, it must be taken with a grain of salt.

It is like my youngest brother who we all assumed like chicken wings.  He was a grown man before we learned that the only reason he ate chicken wings was because that was the only part of the carcass that made it down to his end of the table.

So it is with trees. Sometimes the only place you find them is where they are clinging by their fingernails, having been elbowed aside by corn fields, housing developments and cow pastures from their preferred haunts.

Birch seeds are cheap. They cost about $13 for 10,000. My quandary is whether to buy them and get a quick start or to wait until June and collect them for free. My inclination is to buy them because I am guaranteed a wider genetic base than I will get from the very few clones that are used in landscaping locally.