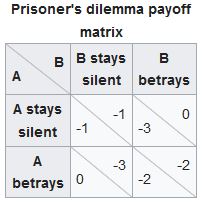 One of the gaping holes in the liberal education is that it never covers game theory. I would be happy if they simply presented The Prisoners' Dilemma.

From the every helpful Wikipedia:


Two members of a criminal gang are arrested and imprisoned. Each prisoner is in solitary confinement with no means of communicating with the other. The prosecutors lack sufficient evidence to convict the pair on the principal charge, but they have enough to convict both on a lesser charge. Simultaneously, the prosecutors offer each prisoner a bargain. Each prisoner is given the opportunity either to betray the other by testifying that the other committed the crime, or to cooperate with the other by remaining silent. The offer is:

Because betraying a partner offers a greater reward than cooperating with them, all purely rational self-interested prisoners will betray the other, meaning the only possible outcome for two purely rational prisoners is for them to betray each other. The interesting part of this result is that pursuing individual reward logically leads both of the prisoners to betray when they would get a better reward if they both kept silent.


"Collective thinking" leads fuzzy-headed people into believing that no "rational" person would steal something to fence for ten-cents-on-the-dollar. Nor would a mugger shoot somebody with a million dollar education to liberate the $70 in their wallet.

But decision-making ultimately resides in the individual and all projections of future events must comprehend that inconvenient fact.