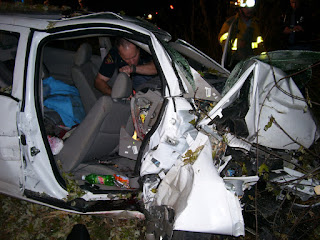 Short adult drivers, especially women, have been severely and fatally injured by the explosive force of a driver’s airbag..even in low to moderate speed crashes. Because of their short stature, from perhaps 4’10’’ to around 5’4”, shorter drivers need to adjust their seat virtually to its full forward position. This places their chest and head in close proximity to the steering wheel. And in the center hub of that steering wheel is the stored airbag, ready to explosively inflate in a frontal impact. The explosive inflation can move the unfolding airbag toward you at...200 miles per hour, and generate a force of 2,000 pounds.  -Source


There is a wealth of information regarding airbags on the internet.


---BIG, FAT, GIANT DISCLAIMER---
I am not an official or agent of any automaker. These are my opinions. Use them at your own risk

The VERY BAD advice, in my humble opinion, is to point the steering wheel at your chest.

My objections to pointing the wheel at your chest
Airbags dissipate energy as they DEFLATE and the deployment and ride-down of the airbag is a tightly choreographed production.

Another consideration is that most people drive with their seats reclined somewhat so the torso also reclines back. The higher you go on the torso, the further aft...and further away from the steering wheel. This is particularly true of those of us who have become somewhat pear shaped over the years.

All of those things contribute to the driver's body encountering the airbag while it is still inflating when the wheel is tilted all the way down and the driver's seat is in the max-forward position.

The quote at the top of this post starts out "Short adult drivers, especially women..." That is not a sexist statement. Women are more susceptible to osteoporosis than men as they age. It also is recognizing that women, as a population, are shorter than men are. Brittle bones afford less protection to internal organs. Couple that with anticoagulants that are commonly prescribed to older Americans for cardiovascular conditions and you have a recipe for bleeding out internally due to internal injuries after an airbag deployment.

I don't like the fact that it costs an additional $100 in parts to buy something that is desirable from a safety standpoint when the average woman in the US is 5' 3". Seems like the auto companies would have figured out a way to design in variable pedals from the beginning. But we live in the world of "is" rather than the world of "should".

If you go to an on-line source and shop for "pedal extenders", be sure that you are not buying pedal extenders that are intended for bicycles.
Posted by Eaton Rapids Joe at 7:15 AM