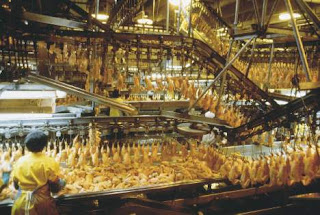 Mark Jewell, a consultant who specializes in helping salespeople "sell" energy saving devices tells a story about a poultry packing plant in the deep south.

The salesperson had presented his best pitch to the plant management several times. The financials were indisputable. The pay-back was less than two years.

After every sales pitch management agreed that it would make the short-list of capital improvements. Every year the LED lighting project did not make the final cut.

The salesperson shared his frustration with Mr Jewell.

Mr Jewell dispatched one of his ace students to see if he could assist.

While the ace student was touring the plant, there was a hick-up in the line voltage and the Metal-halide lamps powered down. The line stopped.

A man came out of a "hooch" near the end of the production line and pulled out what looked like a gun. He walked over to the line and pointed the gun at the floor. And he stood.

After what seemed like an eternity the man walked back into his office and shortly thereafter the line started back up.

"What was that all about?" the ace asked.

"Oh, that is the Federal inspector." the guide said dismissively.

"What was he doing?" the ace asked.

"Federal standards dictate the level of lighting at final inspection." the guide informed him. "He had a light meter and we can't start until he is happy."

The ace asked, "Does this happen very often?"

"What does it cost to shut down the line?" the ace asked.

"We lose $1000 worth of salable product a minute when the line is down." the guide proudly informed the ace.

The next time the sales person visited the plant he made a studied, off-hand comment "I don't understand why you don't buy my product. It costs you over $400,000 a year. It is like you are crashing two Ferraris in the parking lot every year and you don't care."

The guide's head swivelled. "What's that?"

"You lost 400 minutes of production time last July alone because the Federal inspector shut down the line. LEDs have a 0.15 second warm-up time. You could have been shipping those 400 minutes. But it is your business. I just don't understand it." the sales person said.

The guide reversed direction. He bee-lined to the comptroller's office.

"Hey, Sid." the guide said. "Did you know you are crashing two Ferraris in the parking lot every July?"

That is the kind of question that gets attention.

Two weeks later the sales person had a signed purchase order in hand.

Liberals are guilty of promising everybody of an equal bite of the candy bar.

Conservatives offer a path where every kid can have their own candy bar.

Why doesn't that message burn through?