Swords and the Knights of Columbus

The 11:00 AM Mass at St Mary, Charlotte, Michigan had a Knights of Columbus honor guard.

Their regalia was bright and their swords were intriguing.  Demographically, the median age is well north of 60.

Personally, I think the Knights would enjoy a white-hot recruiting season, especially among the under thirty crowd, if they replaced the swords with something like this

or some of these 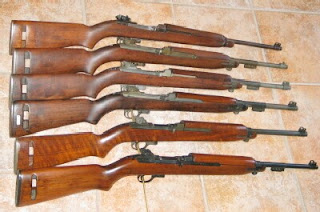 We live in perilous times.

Attacks on churches seem to be rising on a world wide basis.  Law enforcement and the judicial system is reactive.  It finds the offenders after-the-fact.  It hands out penalties.  The baseline assumption is that bad guys rationally assess the economic payoffs of a malfeasance before the fact.  Foot patrols and "school resource officers" are more rational in my mind because they have presence before and during the commission, rather than showing up with chalk and crime-scene tape after-the-fact.

And lest one think that protecting one's self from threats in non-Biblical, consider the following.

Deuteronomy, Chapter 20 provides two different "flow charts" for dealing with cities of the enemy.  Cities that are a considerable distance from the homeland are treated one way.  For enemies who are an immediate threat Deut 20:16-18 commands


But in cities of those nations which the Lord, your God is giving you as your heritage, you shall not leave a single soul alive.  You must doom the all - the Hittites, Amorites, Canaanites, Perizzites, Hivites and Jebusites - as the Lord, your God, has commanded you, lest they teach you to make any such abominable offerings as they make to their gods, and you thus sin against the Lord, your God.


It is possible to walk around a snake out in the pasture or woodlot.  It is much harder to "live in harmony" with the snake that crawls into your bed.


The sword was an emblem of the officer, as the officer was typically mounted and thus could rarely use the common foot soldier's weapons to good effect.  As such, the sword became a symbol of virtue, honor,  strength and fortitude.

In more recent times the handgun was the symbol of the officer.  He no longer rode a horse but was still excessively encumbered with a full battle weapon entering and exiting a jeep or helicopter.

In current times, the foot soldier is often transported in motor vehicles and his weapons have become shorter and handier, to more quickly bring into action when exiting the confines of those vehicles.  The officer's weapon converged to be the same as the common foot soldiers.  They now have the same constraints and one of the lessons of asymmetric warfare is that you do not want to point out high value targets (officers) to snipers and other combatants.

Another factor is that every American who needs corrective eye-wear has it.  Every American can see and recognize their commander's face at +50 yards....which is something of a historical anomaly.  The foot soldier's improved vision means that it is no longer necessary to give the commander a "macro" symbol of his office.


One more thing that tickles my sense of the ridiculous is that the anti crowd would have to trash the first two Amendments in the Bill of Rights to confiscate my "regalia".  Not that it would slow them down very much.
Posted by Eaton Rapids Joe at 11:16 PM