The Nebraska Huskers were playing a late night bowl game out west.  All of the locals were at the Watering Hole.

The game was close and ran late.  Sales of liquid goods were brisk and sustained.

After the game, one of the young bucks announced, "Well, I guess it is about time."

He exited the bar and shuffled through the six inches of light, fluffy snow that had fallen.  He pulled out his keys but they slipped out of his fingers.  He groped around in the snow to find them. He lost his balance and fell on his dupa.

Laughing, he looked up and saw the State Police Cruiser.  The cops were pissed to have missed the game.  They pulled a crap shift and were missing the best entertainment of the year.  One advantage of being a cop, though, is that you can make your own entertainment.

Young man started his truck and then proceeded to brush every flake of snow off of it.  He kept glancing up at the cruiser in the vain hope that they had departed.

Finally, he got in his truck, drove to the exit, came to a full-and-complete stop.  He actuated the turn indicator and let three full blinkity-blinks elapse before turning onto the state road.

The cruiser tucked in behind him.

After following him a mile down the highway, driving 15 mph below the speed limit, the cops ran out of patience.  The turned on their lights and siren.  The young man immediately complied.

The license, registration and insurance took about 20 minutes.  Then he blew into the Breathalyzer.  The needle did not twitch.

The cops were baffled.  They had watched the man exit the bar.  "Do it again!"  They got the same result.

"What the heck?" they asked.

They young man smiled a beatific smile and announced, "Well, dontcha see, I am the designated decoy."

The cops spun around and all they could see was an empty parking lot.


Speculation swirls about Obama's post-Presidency home.  The latest rumor is that it will be this property in Rancho Mirage, California.

Not only is this a grievous breach of operational security, it is an indefensible position.  Literally.

One might argue that this President did not perform all of those acts.  That matters little to a culture that manages by object lessons.  Saddam Hussein would obliterate entire villages when word of an assassination  plot was uncovered.  Since villages were based around extended families (i.e., nearly everybody was cousined-up) destroying the village would eradicate an entire family's blood line.  This is the end-point that "collective guilt" leads to.  Parenthetical note:  The foundation of the theology of White Privilege is based collective guilt.

Every President, by virtue of the office he/she held, creates many, powerful enemies who take vengeance as a matter of personal honor.  This trend has been accelerating. 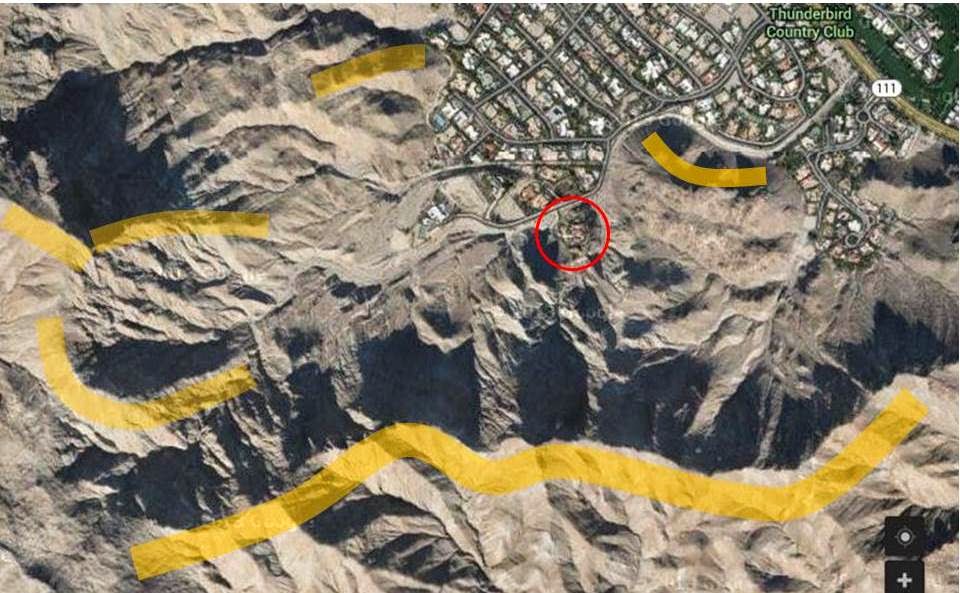 Yellow highlighted areas are regions close enough the circled property to easily threaten it.  The yellow line comes to within 300 yards of the property, close enough for trained rifleman to shoot ground  squirrels with 1955 vintage weapons.

In a word, this property is indefensible.  It is my hope that it is a Designated Decoy or that adequate resources are allocated to secure it.
Posted by Eaton Rapids Joe at 12:17 PM