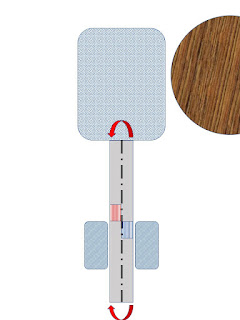 One of the most critical parts of the system in limiting the peak accelerations experienced by the occupant's head is the head rest.

Plastic hinge theory suggests that a rectangular, ductile beam in bending will max out at a moment equal to 0.25*Width of beam*Yield stress of material*thickness^2.

The problem is that younger, shorter, lighter occupants lower the headrest and the bending moment DECREASES, thus raising the force level generated by the plastic hinge.

Having a stepped or tapered guide rod partially addresses this issue.

The table shown above assumes a functional bending length of 8" in the lowest position, a six pound head and 12 G target decel. The table assumes TWO rectangular, steel, strap-type guide rods for the head rest with a yield strength of 30ksi.

One might reasonably expect to get a travel of 4" from 8" long guide rods in bending. From a budgeting standpoint, we need about 30" of launch-pad to accelerate the occupant to the velocity of the bullet vehicle and a well designed head-rest gets us almost 15% of the needed distance AND gives us a way to positively discriminate between low-mass and high-mass occupants. And it is cheap and does not weigh much.