Customizing Google News AND pushing back against "Progressive" media outlets

I was messing around with Google News feed. It occurred to me that there had to be a way to customize news sources. If, for instance, you have a low tolerance for stories from CNN, NPR or Slate then Alphabet programmers probably have a way to turn them off.

Furthermore, Google News is a big player and they probably don't get a lot of "signal" from their viewers. Google is all about algorithms. It certainly counts clicks but it also, certainly, counts the number of readers who divorce news outlets.

The generic algorithm is likely to start skipping stories from a given source after enough clients actively turn that particular source off. That starts biting the ad revenue of the news source in big way.

This is how to do it.

This is a story sourced from Slate. Slate is not my favorite news source. They don't "break" stories. They "interpret" them. That is, they spin them and tell the public how they are "supposed" to react to them.

If you hover your cursor over the source, several icons show up. The icon on the extreme right is three dots arranged vertically or like the letter "L" in Braille.

Clicking on the middle choice hides all stories from that source. 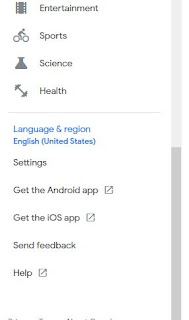 If you click on Settings you will get a menu that looks like the image shown above.

If you then click on Manage you will generate a screen that looks like the image shown below. 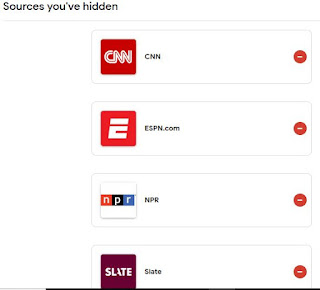 What was curious was that I found conservative news sources turned off when I first accessed this screen.

I have no clue who turned those sources off.