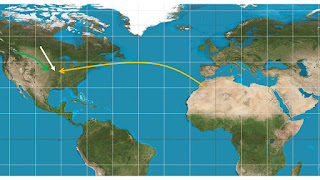 Phosphorous from West Africa (orange arrow), potassium from Saskatchewan (white arrow) and anhydrous ammonia from British Columbia (green arrow) are added to the soil on a farm near Elmo, Missouri. 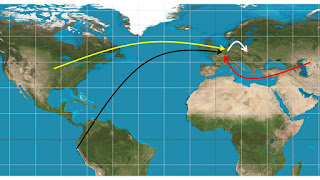 The grain produced on the farm (yellow arrow) is shipped to the Netherlands along with Peruvian fish meal (black arrow) and petroleum based fuels from Kazakhstan (red arrow). The swine facility cannot stay in business unless they can prove they have a contract for a Polish farm to take their manure (white arrow) and other wastes and dispose of it in a "green" manner.

That manure contains the potassium, phosphorous and nitrogen originally mined or "fixed" in Saskatchewan, Morocco and British Columbia respectively. 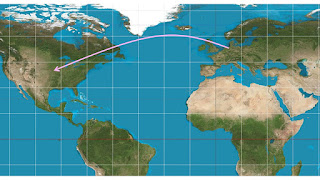 Due to Byzantine European Union rules and the dynamics of high fixed-cost businesses, some of the pork is processed into ham salad and faux Spam by Turkish workers in The Netherlands and is shipped back to the United States labeled as "Dollar Store" products (pink arrow).

Our housewife in Elmo, Missouri buys some of the ham salad to make sandwiches because she works for H&R Block and it is tax season. She does not have time to make her own sandwich spread.

Does that make any sense at all?