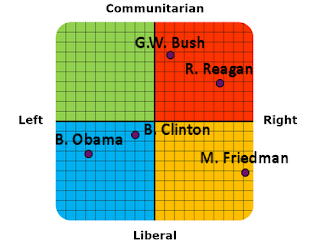 I want to see a heat or topographical map of all respondents. 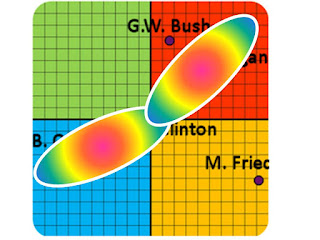 
Prospect theory contends that people "feel" gains with one third the intensity that they "feel" losses.

As a matter of practical reality, nearly all of us both pay taxes and all of us receive benefits.  Before you object that you do not receive benefits, consider the fact that you drive on public roads, drink municipal water and may fly out of airports with air traffic controllers on planes piloted by people regulated by federal rules.

Prospect theory suggests that a person who has always paid 30% in taxes and received back one third of that as benefits is "neutral" with regard to having their tax load reduced.  The (theoretical) gain of paying a dollar less taxes is exactly counterbalanced by the (unavoidable) loss of thirty-three cents of benefits.

Because as people, before the transaction we know that all gains are theoretical and subject to poaching by other stakeholders.  Whereas the loss of benefits is a known certainty that is likely understated.

People who feel powerful rarely use absolutes.  They reserve those terms for Newtonian laws.  They often make an effort to quantify probabilities....."80% likelihood" is more credible than "absolutely sure".

Questions that are posed in absolute language will appeal to people who feel less powerful, people who automatically repose issues in terms of losses.  Questions posed as absolutes tend to be polarizing and, in my opinion, push survey subjects into the lower-left corner.

Questions that are posed as likelihoods and used terms like "more often", "trend" or "long term" tend to be less polarizing and more people will drift into the upper-right quadrant.


Canny survey writers know that they can easily skew results by how they pose the questions.  The classic case involves vaccinations.  Posing the "gamble" in terms of losses or gains will shift the majority of the respondents from risk adverse to risk seeking.

It takes a gifted survey author to create a survey that is bias neutral.  Minute changes in wording will cause gross changes in the elevation of Mt Obama relative to Mt Reagan.  That is why most debaters will restate an issue; to reframe it in the way that predisposes the audience to favor their platform.
Posted by Eaton Rapids Joe at 9:47 AM