As reported earlier, we have a "wildlife orchard" and a "serious" orchard.  The serious orchard saw significant tree deaths over the last couple of winters.  Furthermore, I extended it into the vineyard because the grapes were not paying their rent.

I planted Bud-118 apple rootstock in the "holes" and in some of the vineyard annex.  They were puny things when I got them.  They were 3/16" in diameter which is slightly thicker than a wooden matchstick.

Today I attempted greenwood approach grafts on 8 of them.  This is a photo essay of that effort.  After some agonizing, I chose Novaspy as my "frame" variety.  It is supposedly coldhardy to -25F and the USDA reports that it is resistant to fire blight.  It is a good apple in its own right for quality although it has not been a heavy bearer for me.  That may be due to shortcomings in my management.

Ed Fackler, a commercial orchardist in Southern Indiana (a brutal environment for growing apple trees) rates Novaspy 14th on his "favorite" list.  This is high praise from a man who has trialed well over a thousand varieties. 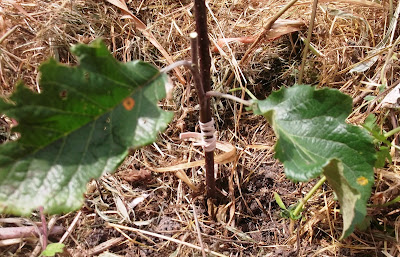 Being an enthusiastic and proficient lier is almost mandatory when one is a horticultural blogger.  It helps if one can do it with style and panache.  There are, of course, reasons why Northerners are much better liers than folks from the southernmost states:  fire ants.  Some Southerners lie....but they don't so much as lie as levitate a short distance from the ground.  It is almost cheating.  I suspect highly developed arrectores pilorum may be the culprit.


If you know anything about grafting you know that there is not a snowball's chance in hell of these things surviving unless I can ameliorate the sun loading and dehydrating effects of the wind.

With regard to dehydration, I have learned to appreciate how forgiving an actively growing rootstock is to a ham-handed  grafter.  With that in mind, I watered these rootstock yesterday with fertilizer enhanced water.  I watered them again today after grafting.  Rain is predicted for tomorrow.  The temperature is 85 F.  They will either knit together quickly or die quickly.

Expect another report in a couple of weeks.
Posted by Eaton Rapids Joe at 5:20 PM