French scientists were at the forefront of scientific discovery throughout the 19th Century and into very early 20th Century.  They were leaders in Mathematics, Biology, Chemistry and atomic Physics.  And then something happened.

The most common explanation(s) are the two world wars.

The first world war was a meat grinder.  French and British generals spent lives very freely.  The problem with this explanation is that the soldiers in the trenches were not forty, fifty and sixty year old scientists....the ones who could be expected to die in the next 6-to-31 years.

A competing narrative is that the giants of 1900-1910 studied radiation and three of them (Curie, Becquerel, and Moissan) died in their early-50s due, in part, to naivete with regard to safety requirements.  That is, they were killed by their research. Had they lived to a more typical 75 or 80 they would have fallen into the next "bin" and perhaps we would not make sport of French science.

The second world war resulted in a massive flight of scientific talent to "safe havens" like the United States and Canada.  This is a more compelling narrative than the WWI meat grinder explanation, in part, because the Nazi specifically targeted "intellectuals" and Jewish people, both were highly represented in the Universities and Corporate research labs.  Even if the researchers did not flee before being invaded, if their research had military applications, they were likely expatriated to Nazi Germany.

The WWII brain-drain clearly impacted the research in "formerly occupied" countries for decades.

What is harder to discern is what, if any, cultural trends may have created headwinds for French people and organizations that wanted to excel at "science".  Those trends could have been taxation, glorification of other professions or it could have been an unwillingness to study progress that was made in other countries (Not Invented Here syndrome).

Another thought is that great scientists are developed.  They do not come into full flower overnight.  Having four of the French Superstar scientists die within a three year period (1906-to-1908) might have put a bubble in the development siphon.  It would be as if four heavy-weight, world champion boxers died in the ring in quick succession.  Many aspiring athletes would seek different venues to showcase their prowess.


It matters because fashion and "taste" are a fickle thing.  The ability to invent and produce is less sensitive to manipulation.  A country that cannot compete head-to-head in technology is reduced to hoping that customers will find this: 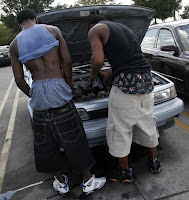 attractive and be willing to pay a premium for "that" look.
Posted by Eaton Rapids Joe at 10:24 PM