I do not have access to a good database, but my perception is that "The Home Team" almost always has a better three point shooting percentage than the visiting team.

I think it has much to do with knowing the sweet spots. 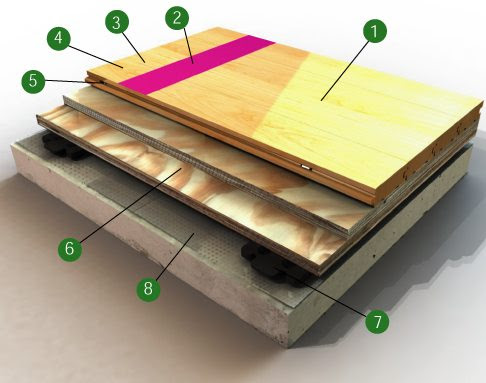 Listen to a player dribble a ball around the gym .  The resonance of the ball striking the floor changes depending on where the ball strikes the floor.  That suggests that the springiness of the floor is not uniform.

Bruce Kelly defined a "robust process" as a process that can absorb anticipatable variation in the input and still produce an acceptable outcome.  Three point shooting is by its nature very sensitive to variation in the springiness of the floor. One way to make a process more robust is to eliminate spurious variation.
The shooter really only has two choices.  They can launch from the area midway between the rubber support pads where small amounts in variation in position has minimal effect on the floor's resilience.  Or they can launch from directly atop the rubber support pad.

The area between the pads has the advantage of a larger area.  Slight variation in location will not have a significant impact on the apparent floor springiness.  The area between the pads has two major disadvantages:  The trampoline effect means that the shooter will be effected by the running and jumping of other players in the area.  It may be that a defender leaping to deflect a shot has more than a psychological effect...their leap changes the dynamics of the floor.  The other disadvantage is that the floor is "spongier" or "deader" in those areas even without the dynamics of the defenders.

The area immediately atop the pads is much smaller than the other local minima/maxima  but it suffers neither of the disadvantages of the areas "between pads" area so it is the clear winner.  But might one find these magical launch pads?


The home team shooters have an advantage because they found "the sweet spots" by trial-and-error.  This is not time efficient and does not work well for visiting teams.

It might be possible to find the sweet spots by the sound of the dribbled ball.  This is rarely a priority during the pregame warm-up. 
Interesting article HERE.  It is possible to use brute computer power to extract audio signal from video.  It relies on the fact that pixels are very small and that there are many, many of them in every frame of video.  That is a lot of data.  Buzz between adjacent pixels suggests that the object might be vibrating.  "Random noise", the bane of sensing, can be diluted if many sets of adjacent pixels are buzzing in synch.

There are some factors that make this a viable alternative.  One of the factors is the "striped" look of most gym floors.  This pattern is extremely friendly for generating pixel buzz for reasons that are easy to explain.

You have probably seen a pattern similar to the one shown above.  You saw it on the colored "Sunday" comics page.  High speed printers use that kind of pattern to synchronize the colored and black inks.  When everything is adjusted right, the colored line will intersect the black line in the center of the black line as show.

Very slight errors in adjustment maps into large shifts in where the colored line intersects the black line.  The printer does not need to make any measurements.  He/she can simply adjust the offset ---on the fly, as the press runs---until the lines intersect correctly.

That same slightly angled line effect also occurs with the natural variation in the color of the individual pieces of wood.  Lots of buzz.

I wonder if any of the more "technical" schools are already looking at this.


Once found, there is still the problem of communicating those locations to the players.  The simplest way to do it would be to "light up" the sweet spots with a laser or some other focused light.