Limitations to Negotiations: Framing as Losses 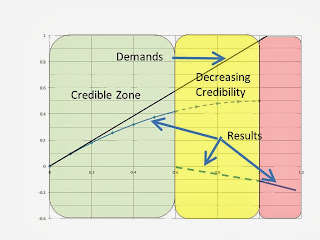 The Results curve starts out closely conforming to the demand curve for small demands. 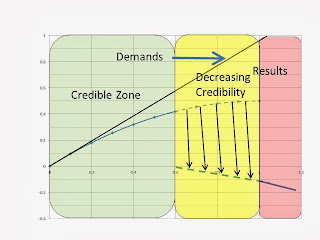 In the yellow region the Results curve can detach from the Demands curve when catastrophic loss of credibility occurs.  It is a bit like a sheet of snow detaching from a steep slope and sliding all the way down to the valley.  As the slope gets steeper the violence of the shock required to trigger the avalanche gets smaller. 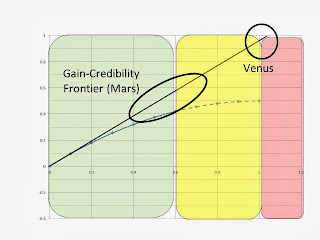 In the book Men are from Mars and Women are from Venus the author contends that women tend to use absolutes like "never" and "always" while men tend to be more factually accurate.  My experience is that people who perceive themselves as "low power" tend to amplify their statements because they anticipate that their input will be minimized or discounted.

Powerful negotiators will likely start their demands near the Gain-Credibility frontier.  Negotiators who perceive themselves as less powerful are likely to take the Venus position of asking for the sun, the moon and the stars.  That puts them in a position where it becomes very easy to frame the progress of the negotiations in terms of losses.

An Example:
Suppose you want to sell your house.  The market is good so you anticipate little difficulty in getting a price that will satisfy you.  You have three appraisers give you estimates for your house will bring on the market.

You select the median (the middle) appraisal and add 15% to give you some "wiggle room" that you can negotiate away and a little extra in case there are some out-of-cost expenses associated with remediating issues missed by the appraisers.  Life is good because you are camped out in the Gain-Credibility Frontier.

Suppose you want/need to sell your house but the housing market is in the ditch. You might start down the appraiser path but you cough up a hairball when you realize that you are upside-down and selling your house will incur a large hit to your liquidity.

Consequently, you either ignore all of the appraisers' input and set the price point where Venus tells you it must be, or you follow a semi-rational path but add 45% for wiggle room.  You can back fill your irrational pricing after the fact with lame excuses like, "It will give me more I can knock off the asking price to sweeten the deal."  But, in fact, the +40% is solely motivated by the hope that a Greater Fool will pay that price.

The net result is that you get virtually no shopper traffic.  Your property becomes an "old" property on the market which reduces its appeal even more.  Your actions triggered a credibility avalanche. 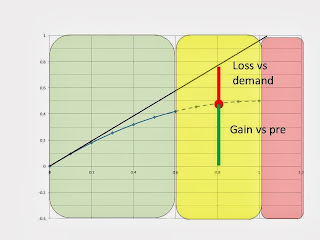 The red and green line shows two ways to perceive a demands position in the middle of the yellow region.  The ratio of red (demands made but not met) vs green (demands made that were fullfilled) gets larger and larger and it becomes easy to fixate on the red.

According to Prospect Theory, framing scenarios as losses drives most decision makers into risk seeking behaviors.  That often manifests as driving deeper into Venus' orbit, cessation of negotiation, emotional recrimination, character attacks  and double-or-nothing thinking.  All of those behaviors are likely to destroy credibility and cause the Results line to completely detach from the Demands curve.


* Inspired by Heuristics in Negotiation, Limitations to Effective Dispute Resolution by Bazerman and Neale.
Posted by Eaton Rapids Joe at 9:12 PM