Night of Fire continued...somewhere in LA 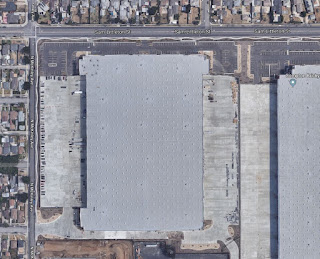 Dilip went with him to the site of what they hoped would be an ambush.

“Why do you think they are going to hit this building?” Dilip asked.

“The first three buildings they hit were foundries, factories where metal is cast into shapes.  They kind of lucked out.  The foundries did not have a lot of people in them so they had a chance to perfect their game plan before they ran into buildings with far more residents.” Pitoitua said.

“We are pretty sure they are using infrared signatures as seen by satellites and traffic to pick targets.  They equate hot buildings with high value.  We did our own assessment and found this one which was pretty hot to start with.  Then we evacuated and added a bunch more heat and tripled the traffic in-and-out.  That, and the fact that it is just a quarter mile off the freeway should make it irresistible to them.  They might not hit it tonight but we know they will hit is soon.  So here we sit.” Pitoitua finished.

Dilip checked his optics and his cameras and his old “dumb” recording devices one more time.  Moving around helped him stay awake.  Even if the ambush was not successful he intended to gather data.

Post-carbon Southern California was incredibly quiet at 3:30 in the morning for those people who had been alive before Cali exit.  The roar of a hundred diesel engines and the hum of a thousand truck tires were audible from ten miles away and attention heightened as the sound continued to get closer.

The lead vehicles left the freeway at the exit closest to their ambush and pulses started to race.  Every person in the ambush had lost family in the last two weeks.  Every person had an assignment.

Most of the Armored Personnel Carriers deployed to the southeast quadrant of the "factory".  The clearly intended to sweep the workers toward the northwest corner where it would be easiest to load them onto buses for transport out.

Many of the vehicles remained on the freeway.  Those were the buses that were going to whisk away the prisoners.  For now they were staying out of the fire zones of the attacking Cali force.  Pitoitua checked his phone and saw No-Service on the screen.

“This is it.”  He beckoned over the squad leaders of the reserve force.  “I need to have you move shooters over there so they can flank those buses parked beside the southbound lanes and take out the drivers.” as he pointed to the where they were parked.  They cannot start shooting until sixty seconds after we open up with the mortars.  Is that clear?”  The veterans nodded their heads.  They were happy to have drawn an assignment where there was virtually no chance of the enemy shooting back. 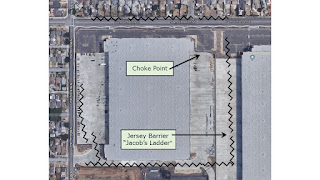 Dilip was recording as the semi pulling the low boy trailer was laying Jersey barrier.  It was moving at twelve miles an hour and the thud of concrete hitting the ground could be felt.  “Damn!  No wonder nobody could slip out the back way.  Most people can’t even run twelve miles an hour.” Dilip said to his assistant.

The one of the leaders of the squads setting up to take out the bus drivers noticed a Hummer parked third from the end.  The Hummer was positioned at a high point that offered a vantage point of the coming raid.  The motor of the Hummer was running and the cab bristled with antennas.

“Oh, SHIT!” the squad leader said.  He tapped the shoulder of the soldier next to him.  “Slight change of plans.  See that bus behind the Hummer?”

“I need to have you take out that driver, and that driver only fifty seconds after the mortars launch.” The squad leader said while pointing.

And with that he dashed along the length of the freeway to get behind the parked bus and crossed over about a hundred yards behind them.  He heard the “Wump” and saw the faint glow of the first flight of mortar rounds being launched.  He set a world record crab crawling forward.  He stood and knocked on the bus’s door and heard the snap of a rifle and the tinkle of broken glass just as the driver opened it.

The squad leader yanked the driver out of his seat and hopped into it.  Fortunately the motor was still running.  He slammed it into gear and floored the gas pedal.  The bus lurched forward, hit the Hummer and wedged it beneath the bus in front.

Then riflemen opened up from their prone positions on the other side of the freeway.  The squad leader fervently hoped that the shooter who took out the driver did not mistake him for his target.  He did not need to worry.  His “shooter” knew that he had put the shot into the original driver’s ear and there was no way he was going to get up and drive the bus.

The four mortars were positioned 1000 meters from the battlefield.  They had been laid in and dummy rounds had been fired to dial in the range and azimuth.

Ammunition was at a premium.  Each mortar had ten rounds and the crew was expected to have the last one in the air before the first one landed forty seconds after it was launched.  All three teams were successful.

At first launch, snipers started taking out the crews serving the ZPU-4 that were facing outward.  The ambushers were arrayed in a line two-and-fifty hundred meters from the target zone.  Snipers were exposed but the ground forces were hunkered down behind cover.  The “book” said that HE rounds were lethal out to sixty meters but anybody with a brain knew that a stray hunk of shrapnel could ruin your whole day from a much greater distance.

As the last mortar rounds landed, the ends of the attack line moved closer to the target zone to form a shallow chevron.  They were tasked with pinching off vehicles that attempted to escape.

All of the Cali soldiers who had been in the open were injured or dead.  The mortar crews had been “walking” their fire to maximize the area that was beaten down.  The four hundred meter by fifty meter paved area had been plastered by the forty incoming mortar rounds.

The APCs were still functional even though the crews manning the ZPU-4s had either dropped back into the armored vehicles or been killed in the barrage.  Small arms fire was pinging off their sides with minimal effect.  The APCs revved up their motors and executed smart 180 reversals. 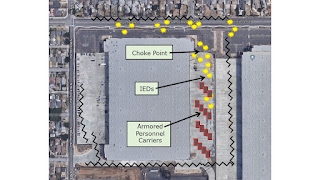 The APCs had a rated speed of 42 miles per hour and it looked like the crews had every intention of exceeding that speed.  Intent on not running over the corpses of their buddies, the drivers did not notice the flanking SD-LA forces pulling IEDs out of concrete culverts.  The IEDs rolled on casters and were leashed together at intervals.  In a matter of seconds the flanking forces had seeded the path out of the kill zone with sixty IEDs.

Each IED was five pounds of HE that was triggered by a slender toggle switch that rose thirty inches above the ground.  The IED did not detonate until the toggle was laid over 45 degrees, thus insuring that it was fully under the APC.

The leading waves of APC were nearly flipped over by the blasts and the IR periscopes of the other drivers were blinded by the flash.

The battle was unexpected by the Cali forces after two weeks of zero resistance.  The victory was nearly total.  A few APC crews had the presence of mind to surrender before they had an RPG up the tail pipe, but most did not.

Some of the Cali forces that had entered the building to launch their tear gas and flash-bang grenades had also survived by huddling behind the building’s interior I beams.

The occupants of the command Hummer were captured due to the quick thinking of the reserve squad leader who pinned it between two buses.  After taking out the drivers, his squad hustled over to the Hummer and the driver and lead officer had little choice but surrender…suicide was not something they had ever contemplated and by the time it occurred to them they no longer had the means to execute.

Dilip got several IFF helmet units. The Cali forces that went into the building consisted of both officers and recruits. The IFF of the expedition force was of particular interest. It not only had 940 nm NIR (Near InfraRed) light emitting diodes, it had two other kinds of light emitting diodes.