The risk of perverse results 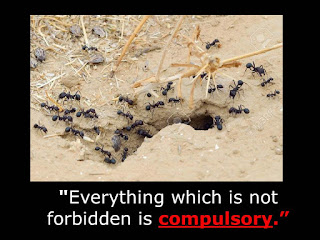 One risk of becoming involved is the risk of perverse results.

For example,  calling attention to Old Man Johnson may get him thrown out of the camper/porch he has been working on.

While there is no shortage of "beds" for homeless people in Lansing, Michigan they come with conditions.  Some places have mandatory chapel service.  Most have strict curfews.  Many of them are in parts of town that are "rough" and offer little in the way of employment.  Many homeless people are destitute because they are mentally ill and severely deficient in social skills.  Not my choice for room mates, especially when the mattresses are twenty-to-a-room.  Bonus link, that guy on the mattress next to you who is coughing may have TB or pneumonia that is highly resistant to antibiotics.

Old Man Johnson sees it as camping in his buddy's back yard.  He is twenty steps away from his friend's back door.  He can take showers, use the can and escape the very coldest weather.  He is within walking distance of a place where he can buy food.  Most of the time he has his privacy and is not adversely impacting his buddy's life.

Some activists would look, horrified, at his living space (about 15X15 feet, total) or his kitchen or his "facilities".  They would demand his removal based on the "Well, if everybody did that...", or "Its not humane..." argument

Other activists take a dim view of people taking care of themselves.  Some of those activists are control freaks.  Others see people taking care of themselves as a threat to their paycheck.  Old Man Johnson's activities are EXTREMELY cost effective.  He is keeping salvageable building materials out of the landfill and waiting for the VA to get around to processing him.

All three types of "activists" fail to ask the Old Mr Johnson's "What do YOU want?"  At this stage of the game he might prefer to spend the winter in his buddy's back yard with the company of his dogs, provided he has a steady supply of food, dog food and firewood.

The biggest risk for Mr Johnson, in my estimation, is if he is evicted by do-gooder/activists and he goes to a Lansing homeless shelter.  Then, he really at risk of being on the street if he violates any of their conditions.   That would suck on a cold or wet night.  Another complication involves the dogs.  No shelter and few apartments tolerate dogs.

All that being said, he would benefit from a carbon monoxide detector if he stays.
Posted by Eaton Rapids Joe at 7:44 AM