One way that I cheer myself up is to go stomping around the woods with plastic bags stuffed in my pockets.  I collect seeds with the intention of beefing up the diversity at my 10 acres of heaven.


It was a good day for collecting Hog Peanuts .

I also collected seeds of Jewelweed.

Jewelweed has a bit of a cult following.  Its devotes claim it cures Poison Ivy, Nettle stings and common fungus infections like Athlete's Foot and Crotch Rot.  While it is a common weed it is not common...not even present...on my property.  These are fun seeds to collect.  The seed pods explode like itty-bitty mouse traps when you clamp down on them with your hands.  Locally, this plant exhibits both yellow and orange flowered populations.  I collected seeds from both types.

Like the Hog Peanut, Jewelweed likes rich, moist soil. Like Hog Peanut and unlike most other annuals, Jewelweed is tolerant of a fair amount of shade....it is happy as long as it gets at least 2 hours of direct sunlight each day.


I saw a garage sale while driving between collection sites.  I popped in to see what they had.


The proprietor was a woman a bit older than I am.  She came out as I was browsing the items she had for sale.  We chatted a bit.  She informed me that there were more sale items in the barn near the back of the property.

Turns out is is Salix sachalinensis ‘Sekka’ Japanese Fantail Willow.

The description at the end of the link describes this tree as "fantastic...surreal", and it is.

The lady let me take a couple of cuttings.  Later, at the end of my collecting pilgrimage, I call Roger Hastay at 517-663-6161 to see if he had any interest in trying to start some cuttings of this willow.  Roger's family owns a greenhouse and he is up for about anything...as long as it can be done with little hard, cash-money out-of-pocket.  He invited me to come on down.  I gave him the larger of the two cuttings (that Karmic Insurance thing).  He invited me to pick some tomatoes.

Roger runs a tomato trial right next to the greenhouse parking lot.  This year everybody's tomatoes were flattened by late blight.  So I was pretty interested in the varieties that seemed least damaged.  The three clear winners were Burpee Better Boy (a hybrid), Polish Linguisa (heirloom paste type) and a Russian Yellow Plum tomato.  Roger encouraged me to pick as many tomatoes as I wanted. 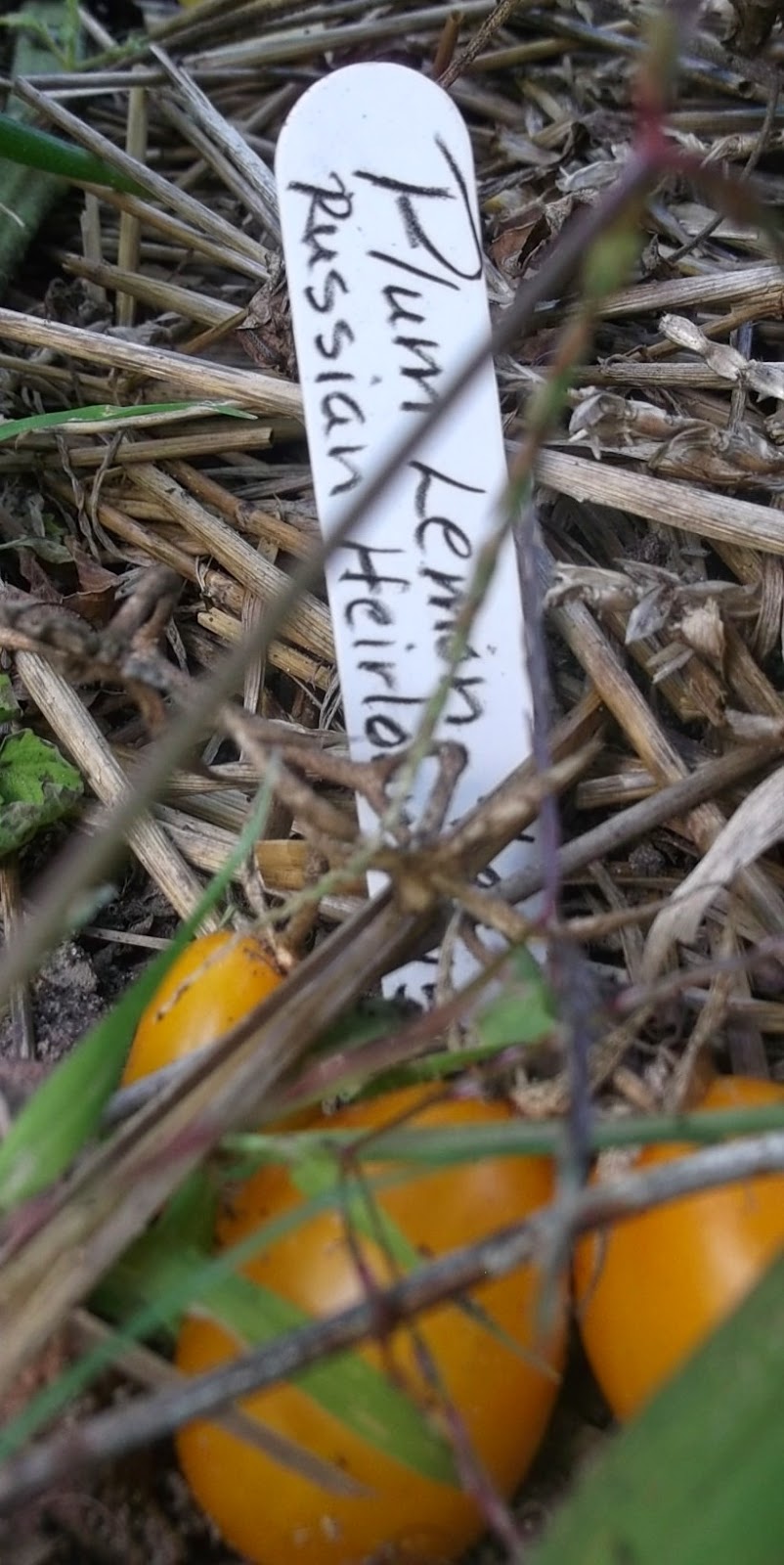 
The Karmic Insurance paid off quicker than I expected.

I went home after dropping off Roger's cutting. I cut the branch I had kept into two pieces and  had picked out a place to plant them.  As I stuck the last cutting I noticed an intense buzzing and many fuzzy yellow and black bugs gushing out of a hole not 12 inches from where I had been digging.  Note to reader: I had stompted down the tall weeds and and had turned over 6 shovel-fulls of soil.  The I had busted up the clods and had just "stuck" the cuttings.

And I did not get stung.  Absolutely amazing!  Had I kept the bigger piece I would have had four cuttings to stick and would have been stung.
Posted by Eaton Rapids Joe at 7:15 PM