What would Nik do?

One of the most formidable gentlemen I know is known as "Nik".  Nik plays poker and chess and was once a professional bookie.  Worry not.  No Capital crimes were committed and the statute of limitations has passed. 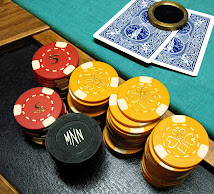 I had an imaginary conversation with Nik about this Bergdahl chap.  Note:  If one goes to Google and types in "deserter" the top three items are about Bergdahl.

I asked, "Is there any way this could make sense?"

Nik took a long, frothy sip from his pint of Guinness and leaned back in his bar stool.  It is not prudent to rush Nik when he is pondering.  He took several draws on his current stoggie-of-choice.  Eyes closed.  Savoring.  Smoke drooled out in a slow show of appreciation.

He took even longer than usual.

Finally he said.  "It would make sense if we implanted a 'cell phone' in the five we traded for him.  Three of them we gave drugs that mimicked heart attack symptoms and we implanted "pace makers".  The other two we implanted the "cell phones" via laparoscopy...maybe through their trachea so there was no visible scar."

(Hat tip to Old NFO for the video)

He continued, "We keep track of them via GPS which is mighty handy for directing a cruise missile strike.  We might even be able to listen to their conversations.  We embed a small charge in each 'cell phone' and can trigger a heart-attack if/when convenient."

"We would collect intelligence on our enemy and the Taliban would cheerfully execute most of the returned prisoners."

I looked at Nik.  "Do you think our side is smart enough to do that?"

He looked at me in disbelief.  "Of course we have people smart enough to think of that.  The question is, do we have policy makers who can put their ego aside and do something smart...for a change."

I asked him, "What do you think happened?"

He winked.  "Five-to-one odds the smart move was deemed to be too risky from a political standpoint.  Two hundred-to-one odds against anybody in the Taliban-Al Qaeda movement ever reading this blog.  But if they did, there is a better than even money chance that all five of the prisoners released from Gitmo will have fatal accidents within two weeks of this post being read.  Five-to-one odds just isn't worth the downside risk to them if they are wrong."
Posted by Eaton Rapids Joe at 2:05 PM