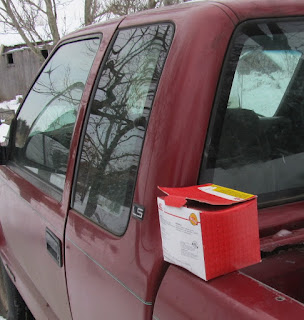 
His crew was roofing ninety townhouses near Big Beaver and Crooks road in Troy, Michigan and they were running behind.  He lived in Tanglewood Village in Brownstown which meant he had to drive through Downtown Detroit.

The boss, Joe Connelly, wanted to start early to beat the heat and kept announcing earlier and earlier start times.

Bob was a "finish man".  He did caps, vents and flashing.  He liked using traditional roofing nails instead of the guns.  His boss humored him.  It was hard to get a full crew to show up so the boss made some allowances.

Driving eighty miles an hour, Bob's truck was virtually indistinguishable from every other vehicle hurling North up I-75 at twenty foot intervals.

The whine of the tires and the thumping of his "mudders" hitting the spalled expansion strips punctuated the country music he was listening to.  There were so many un-repaired potholes left over from winter that it was pointless to try and miss them.  He never noticed when he lost a five pound box of 1-1/2 inch, electro-galvanized roofing nails somewhere near mile marker 91.

The shoddy, cardboard box exploded when it hit the rough concrete.  It sprayed one thousand-eighty roofing nails across all three lanes of traffic and both shoulders.

The effect on I-96 and southbound I-75 was delayed by thirty seconds.  Rubberneckers left their lanes.  Distracted commuters stood on their brakes.  The issue was exacerbated by the fact that commuters were pouring around a sweeping bend and turning into the rising sun....just as the carnage unfolded on I-75 northbound.

1760 vehicles a minute were packing into ten lanes of chaos and rage.

The Ambassador Bridge to Canada was closed before Bob got to his job site.

"I am surprised you bothered to show up!  The radio says traffic is a cast iron bitch downtown." Joe Connelly said.  Joe could be a sarcastic bastard.  Bob could tell it was not going to be a good day when he could not find the box of nails he KNEW he put in the truck.

A half hour after Bob hit the pothole, the resulting gridlock closed the tunnel to Windsor.

Due to the "revitalization" of Detroit, many of the commuters worked in downtown Detroit.  Many of them abandoned their vehicles and walked to work.  Opportunistic residents who lived near the freeways started to filter in.  They sensed loot.  Road rage, theft, and sexual assaults were in-progress.  The first homicide would occur thirty-five minutes after hitting the pothole.  The resulting crime scene was one hundred yards wide and thirty-five miles long at that point.

Bob was still looking for his nails.

The first factories were two hours from shutting down due to lack of parts.  Some factories responded by inspecting and reworking defective material.  Inventories were low coming out of Memorial Day weekend.  There were many vacations and much absenteeism the previous week.  Some of the people who did show up for were were hung-over.  Quality and throughput were impacted.  Some firms started calling workers to cancel second shift for that day. 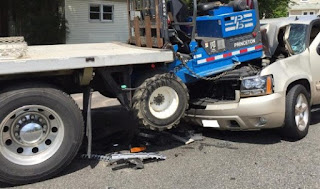 Violet Connelly was the wife of Bob's boss.  She was one of the hapless commuters who had been behind Bob.  She was applying lip-gloss when she first noticed the brake lights ahead of her.  The brakes on her SUV locked up and she plowed into the back of a flat-bed truck delivering fencing.  Lucky for her, the front of her vehicle yawed to the left.  The bed of the truck in front of her first cut through the base of the right windshield post.  It stopped just before it reached the rim of the steering wheel.  Violet would have been decapitated if the vehicle had not yawed or had spun to the right.

Looking around, Violet said "Fuck it all."  There are advantages to being married to a person in construction.  For one thing, it expands one's range of expressions that are suitable for such occasions.

The door opened.  Violet could see that she would miss an entire day of work if she stayed with her vehicle until "authorities" arrived.  She took a few pictures with her smart phone and then started hiking out.  She appeared to be texting as she walked.  She was not wearing sensible shoes.

By six that evening, factories in Detroit, Lansing, Chicago, Toledo and Cleveland were sending people home due to lack of parts.  A single automobile is build of approximately 30,000 discrete parts.  Some parts can be added later....like emblems.  Other parts are integral to the build and it is simply not possible to build the vehicle if you do not have the part.  Examples of integral parts include instrument clusters and pistons. 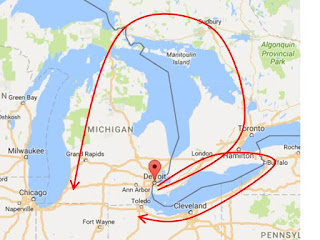 Dispatchers were confronted with a dilemma.  Rerouting shipments that were on the road involved sending them through Buffalo, New York or Sault Saint Marie, Michigan.  Many of those shipments were gridlocked in Sarnia/Port Huron  and could NOT be rerouted.  Shipping through either of the alternative routes would add about 15 hours transit time.  Not only would more production be tied up on-the-road, it would require many more trucks than were available.

Bob was pissed.  He was going to have to use 1" nails, which meant he was going to be smashing his thumb with his hammer all day long.  He was sure he had put those nails in the truck.