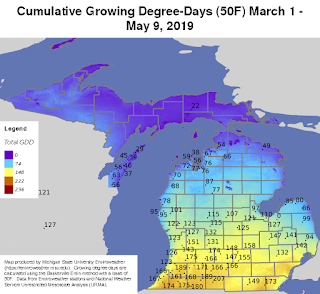 We are sitting at about 160 Growing Degree-Days. The average for this area is 220 GDD.

The first few blossoms on the Liberty apple trees are open.

The cold damage from the -18F and then -16F a week later are evident.

The peach trees survived but no blossoms opened.

One apricot had no blossoms, one had a few and a third had nearly a full load.

The grape vines that were planted last year were a mixed bag. The wild riparia were by far the hardiest. The Swenson Red was a distant second. Then Geneva Red and Steuben in a close three-four. Lucie Kuhlman, Chelios and the others bringing up the rear.

One surprise was a Trebbiano X riparia cross. One selection died to the ground while the other was as hardy as Swenson Red. It is premature to make solid calls based on how they performed the winter after they were stuck as un-rooted cuttings. They invest a lot of resources into sinking roots...resources that are not available to harden buds.
Posted by Eaton Rapids Joe at 7:12 AM