At the rock pile beside Silver Creek
After passing Chernovsky's instructions to Donnie, Quinn thought he was done for a while. With zero mobility he could not participate in mopping up the ambushers in front of him. He could however, precisely identify where they were. Using his binoculars he was able to sort through the cover and identify their precise locations relative to more visible surroundings.

On the odd chance he might be called upon to provide long-range fire support, Quinn pulled the disposable, plastic grocery bag out of his backpack and filled it with the loose duff on the ground. Tomanica had impressed upon his guys that you did not want to use your pack for a steady rest because you might find yourself moving in a hurry and you did not want to lose your drinking water and other necessities. Hence the grocery bag. You would not feel bad if you had to leave it behind.

Quinn was impressed. These guys were as good as his guys. Whoever had recruited this group had obviously recruited ex-military. There was almost no head scratching and mosquito slapping even though he knew they were probably being eaten alive by the first hatch. It did not occur to him that they might have bug spray.

Everything was jolly until he saw Dysen riding east down Vermontville toward camp, directly toward the ambush. She was on a bike and pulling her cookie cart. 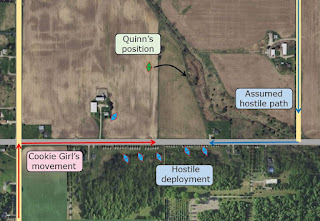 Being professionals, he hoped that they would let her ride through. Quinn's squad had passed on shooting the kid on the bike in their first engagement because they had bigger fish to fry. Surely the hostiles would not want a dead body in plain sight where it would tip off Donnie's squad.

Quinn had almost breathed a sigh of relief as Dysen was passing the sixth ambusher when Quinn saw her somersault off the bike quickly followed by the report of a high-powered rifle. Quinn had seen enough limp rag-doll cartwheels to recognize a head-shot when he saw one.

“You rotten mother-fuckers!” he said as he flipped his AR’s safety to the fire position.

Then the professionalism Chernovsky had been hammering into him for three months took hold.

Donnie radioed back. “Give me thirty seconds to button up the troops. Repeat, do not start the party for another thirty seconds.”

Donnie transmitted to the two squads. “Did you catch that? Party starts in twenty seconds. Get cover. Get a sight picture and wait.” Donnie had a thought that this might work out to his advantage as long as his guys didn’t start shooting too soon.

The thing is that Chernovsky had transitioned to coach and the coach is not on the field. He had to trust the guys out there. Trusting people he had trained was the hardest thing he had ever done.

After a slow count to thirty, Quinn started hammering the ambushers. He had dialed his 1.5-6X MTAC scope to six power. He shot the westernmost ambusher (the one who was closest to him) square between the shoulder blades. Then he transitioned to the most eastern ambusher because he was the one most likely to close with him due to the cover. From there he worked west, servicing each target with a double-tap.

At two hundred yards he could hit a pop-can with boring regularity. The problem was that the targets were not completely visible and were moving to get more concealment.

He had four probable kills and was working on the fifth. In a gun battle between a fighter with concealment and a fighter with cover, always bet on the fighter with cover. However, there were two fighters firing back at him and they were becoming way too accurate. Quinn knew the game would be over if he got stone chips in his eyes. Quinn decided it was time to abandon his hide.

Two miles west of Silver Creek
The two squads had just enough time to ease into cover at Quinn's unexpected radio call. One squad member was caught in the middle of an opening. He dropped to a knee and tipped his head so his face was not visible. The months of carrying firewood and living in the mud paid off. He looked like a rotten, moss covered stump.

The squads had been moving into position. The squads had no problem finding the bait before Quinn opened the party. They could hear the bait from half a mile away and were not moving east on the highway.

A quick look at the terrain, terrain they had gamed over many times, made it pretty obvious where the kill sack was and where the gunners had to be situated.

Surrounding the gunners had taken a long time because it required a lot of walking. The squads were a half mile northeast of the trap when they determined the exact location of the bait. One of the squads had to drop back farther east so they could get to the other side without being seen by hostiles. Donnie's fighters were within two-hundred yards of where he assumed the primary ambushers were when they heard the shot from the east and Quinn announced he was going to start the party.

Donnie had been getting ready to start the show when the first, distinctive “BOOM” of the AR came rolling in from the east. Then Quinn's call came. Then the sounds of a hot fire-fight.

The squads sat tight waiting for Donnie’s word to light up hostiles.

Then the firing stopped.

The hostile gunners who were lying in wait to ambush whoever came to the bait must have assumed that the ambush to the east had wiped out the squads Chernovsky was expected to send. The ambushers who were using the “bait” left their positions when the rash of shooting to the east stopped. They gathered in the open to confer. Donnie was embarrassed to see that two gunners had been positioned in places he had not anticipated.

Donnie radioed the group. “Start with the gunners. Then the bait. Kill them all.”

At Squad 2's camp
Hostiles who had been infiltrating the brush heard the shooting and assumed it was game-time and rushed the camp.

Finding the camp empty, they milled around in the center of the opening. Just because somebody they had once been in the Army, Navy or Air Force didn't mean they had retained any tactical sense. Many had been cooks and truck drivers and other, non-combat occupations.

Squad 3, the Squad that had seen almost no action cut them to ribbons. Three of the hostiles were wearing body armor but that made little difference as Squad 3 concentrated on head shots to compensate for the puny .22s they were using. In the chaos one of the hostiles shot Buddy in the short-ribs. Chernovksy had never run Play #47 as a live fire exercise and Buddy stood up to see what was happening

The two fighters who were in the observation post were shot when the hostiles stumbled upon them as the hostiles retreated. The .22 LR were very poorly suited for close range fire-fights.

Beside the rock pile at Silver Creek
Quinn dumped the empty magazine even as he crawled backwards with his swollen ankle smacking into every willow trunk and rock behind him. It was almost as if a magnet was pulling his ankle into hard objects. Quinn jammed in another magazine and slapped the bolt release to chamber a live round.

Quinn assumed he was screwed. He had not put in hearing protection before shooting and he would not be able to hear anybody rushing his position.

He had managed about seven yards of backward travel when two men vaulted over the rock pile, the man on the Quinn’s right slightly before the man on the left. They hesitated for a fraction of a second as their vision homed in on the flesh colored grocery bag that had tumbled to the base of the rock pile and been dragged about ten feet as Quinn crawled backwards.

Quinn drilled the first man through the head. The second man was moving. Quinn nailed him in the chest and then another through his head, but not before the man was able to get off a shot. Quinn was not as smooth or as fast when traversing from right-to-left as he was when traversing from left-to-right. Perversely, he heard Chernovsky’s gravely voice in his head “Write that down: Training opportunity.”

The bullet hit Quinn in his right butt-cheek and angled down across the outside of this thigh before burying itself in the dirt.

That is when time began to get funny for Quinn.