Mark and Rosie’s travels were slowed by weather and flooded bridges. Even when they could travel Rosie’s footwear limited them to ten-to-fifteen miles a day.

Mark followed his intuition and his compass. He stayed off paved roads correctly assuming that is where the most conflict would be. He did not want to be on the wrong side of a gun when the person carrying it had an itchy trigger finger.

As they headed north and were confronted with a fork in the road, Mark always chose the left fork. He knew they were too far east to hit Eaton Rapids.

Mark and Rosie took pains to be as invisible as possible. They traveled in the earliest morning hours and left the road when they heard people approaching. You can’t shoot a ghost.

They had an unusual encounter with a native guarding a bridge over the north branch of the St Joseph River. He asked for their names and where they were headed.

Mark replied “My name is Mark Salazar and I am heading to Eaton Rapids. I have family there.”

The guard scratched his head and said, “Seems like I have heard of Eaton Rapids. Isn’t that near Kates Strore?”

Mark ruefully acknowledged that he had never heard of a community called Kates Store.


Another encounter in Amboy Township was similar. That encounter occurred just south of the bridge across the south branch of the Kalamazoo River. The situation was almost surreal. 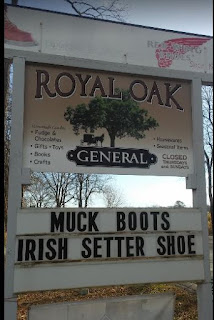 On a hunch Mark followed signage a mile west to an Amish store. It was still in business. The proprietor would not let him in the building but negotiated prices from the front porch. Mark had some old, silver coins he had found in Grumpy’s attic. He had given them to Rosie and she handed them right back.

She could not be bothered to carry coins. She knew that wasn’t ‘real’ money.

The proprietor was more than happy to sell corn nuts (deep fat fried kernels of corn), peanuts and other food for real silver.

Heading back to 29 Mile Road Mark ran into another person guarding a bridge. The guard knew exactly where Eaton Rapids was and knew somebody who had radio communication with somebody in that town.

Mark decided this was a good time to take a break.

Things got a little bit tense when Paul Seraph said that the Mark Salazar from Eaton Rapids was dead and his one daughter was accounted for. It took the better part of an hour to play twenty questions to assure Seraph that he was the real Mark Salazar and that the young woman Mark was with was his adopted daughter.

With Ebola, Cholera, Typhus, Bubonic plague and fraternal violence running rampant there had been a great deal of familial re-arrangments.

Seraph apologized for not being able to send transportation. His people were stretched too thin. Paul said he would inform Kate and Rick that he was alive and well and four days hard travel from home, weather permitting. Seraph also said he would do what he could to have “care packages” of food available at 10 mile intervals. It would not be much...some oatmeal or hardtack or whatever could be spared by the locals.

Mark had never cared much for Paul Seraph. Paul had only been in Eaton Rapids for a few years before Mark joined the Coast Guard. Mark had a bit of a chip on his shoulder. Paul was much, much older and from “the big city.” Mark was sure that Paul looked down on all the country mice.

Having been away for a decade, Mark never had a reason to reassess his biases.