Janelle gets a bee in her bonnet 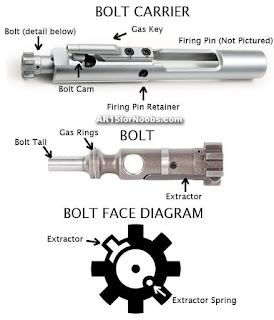 Janelle sat, staring at the table covered with the parts of a disassembled rifle.

Kelly was not the kind of man to fill the air with senseless chatter. He let her stare.

After five days of watching her spend virtually every spare moment just staring at the parts, Kelly caved.

“What are you thinking?” he asked.

“I am thinking the shotguns were a piece of cake.” Janelle said. “I think it is time to reach a little bit.”

They agreed to build the shotguns in “batches” of ten. That would give them some efficiencies of scale but would also give them opportunities to make changes.

The first batch was a struggle. The second batch of ten was hard. The next two were built with no issues. Even though they had planned on building 100, the demand slacked off after thirty-five. They they stopped building at fifty preferring to conserve resources. The fifteen extras were in the vault.

Kelly got a cold chill down his spine. Janelle was looking at a disassembled AR-15, a very sophisticated weapon that used high-tech processes.

“You aren’t thinking of making AR-15s, are you?” Kelly asked.

That is when the hackles went up on the back of Kelly’s neck.

A bit of history is in order to make sense of what Janelle said.

The AR-15 was a space-aged weapon made from forged, aircraft grade aluminum and made with exquisitely tight tolerances.

When first deployed in Vietnam, the weapon was subject to jamming after relatively few rounds were fired. The cause of the problem was quickly traced to the chemicals added to the smokeless powder to buffer the acid products that accelerate the deterioration of smokeless powder in hot, humid climates.

The other factor that made the AR-15 exquisitely sensitive to powder residue is that the design is a “direct impingment” design. A small hole was drilled in the barrel and a tube carried the high pressure, contaminated, gasses directly into the upper receiver where a small piston/cylinder arrangement harvested the energy of the gasses…and then indiscriminately spewed the ash contamination into the upper receiver where all the small, moving, closely fitted parts lived.

Other chemical buffers were found that did not leave solid residues and the problem, mostly, went away.

Approximately 1% of the original smokeless powder became solid residue that gummed up the lockworks. By contrast, black powder leaves almost 50% of its original mass as solid residue.

Had it been anybody other than Janelle, Kelly would have harshly rebuked them for the stupidity of the idea.

“Why black powder?” he asked.

“Someday we are going to run out of components for reloading AR ammo. I am trying to stay ahead of the game.” Janelle said.

“You know that you picked about the worst action in the world for running black powder, don’t you?” Kelly said.

“Yup. That is why it has to be changed.” Janelle agreed as if that was not a big deal.

Poking the gas key on the bolt carrier, “Why does that have to be in the upper receiver?” Janelle asked. “Why can’t the gas key be longer and have the gas tube end in the hand-guard?”

Kelly had never thought about that.

“And since the gas is still under pressure when the gas key moves away from the gas tube, why not cut the end of the gas tube on the diagonal so it biases the gas to the right and out of the handguard or route it around and vent it out the bottom?” Janelle asked.

“Those guys who build two-stroke racing motorcycles know a lot about using pressure and momentum to move air and fuel where they want it.” Janelle said. “I don’t see why we can’t use tuning to kick most of the gas out, away from the upper receiver and action.”

“You know black powder cartridges won’t have nearly the power of smokeless ones, right?” Kelly asked.

“So what are you going to do about receivers?” Kelly asked. “It is not like we have a forging press for 7075 aluminum.”

“You are right. We don’t.” Janelle said. “The lower receivers don’t need to be that good. Heck, you can buy them...” then she corrected herself “...you used to be able to buy them made of polymers.”

“Did you know that we have a neighbor who worked in a small shop making investment castings for a company that sold custom jewlery?” Janelle asked.

“Yeah, Bob.” Janelle said. “I bet Bob could design and make the patterns in his sleep.”

“I thought investment casting used wax pieces that were melted out of the mold.” Kelly said. “Why would we need molds?

“I was thinking it would be more ‘production’ if we used steel molds for the exterior surfaces and sand or plaster cores interior surfaces that aren’t undercut. Then use Bob’s wax pieces for the most detailed areas.” Janelle said.

“I still don’t think you will be able to hold the tolerances the AR demands.” Kelly said.

“That is what shims are for.” Janelle said.