Rick jollied Kate into making a two day "trial run" of their preps.

Kate was onboard with the wood heat but opted out of the diet. She did agree, however, to document the experiment.

The trial run was a fiasco from the start.

The cistern pump that Rick had purchased on-line was not able to pull water from the well. If Rick had researched a bit more he would have learned that "sucker pumps" can only pull water up twenty-five feet or so. The water in his well was a good forty feet below the surface. Even pulling from a spigot in his basement left him trying to pull too much.

Then he found that getting water from the nearest source of open water, Kelly's pond, left much to be desired in the winter time. He had to spud a hole through the ice and lift it out with a scoop. Then carry the five gallon buckets to the truck.

Half the water sloshed out on the way back.  Kate asked what the plan was when the gasoline ran out. Rick did not have a good answer. Kate made notes in her spiral notebook.

Rick boiled the water on the stove. The stove used LP gas. Kate asked what his plan was when the LP ran out.  Rick did not have a good answer. Kate added to her notes.

Then Rick started a fire in the fireplace. Once it started going he turned on the blower. Kate looked up, "I thought the grid was down?"

Rick turned off the blower. Almost no heat entered the living space. Kate donned a parka and mittens. That, as much as anything, aggravated Rick. Kate's exact age was privileged information, it was sixty give-or-take something, but Rick still found her attractive and was perplexed that she was looking like the Michelin man.

On Saturday, Rick broke open one of their oldest five gallon, food storage buckets. It contained white rice, split peas and vegetable oil. The air seal on the bucket had broken and pantry moths had gotten in. Rick washed the insect remains out of a couple handfuls of the rice and boiled it for breakfast. Kate looked the other way when he drank a cup of coffee from the pot she had brewed. Rick was a bear when he did not get his caffeine.

Rick's lunch was white rice with green-pea gravy as was his dinner. He was going to add vegetable oil to the green-pea slurry but the oil had turned rancid in its plastic bottle.

By noon Sunday Rick was constipated and had no energy. His lethargy left him cold. It was all he could do to pry himself off the couch and drag in more firewood...firewood that wouldn't provide any heat.

He was also bored out of his mind. He was used to getting on-line. He had a few favorite TV shows. It was like an itch he could not quite reach far enough to scratch.

The postmortem was enlightening.

The rule-of-threes puts water at three days. Clearly, something had to be done. After batting about several ideas, Rick and Kate decided on a roof-top collection system for spring-summer-fall and a solar powered, immersible pump for winter.

The solar powered pump could irrigate the garden and orchard during the summer.

The issue of heating raised a bit of a quandary. Kate wanted things to look nice. She was not ready to jump right to a wood stove. She thought most of them were hideously ugly. 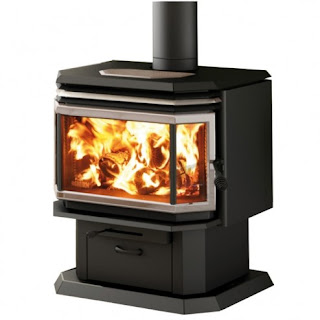 Rick had to do some research before he found a wood stove that had glass that wrapped around the fire. Kate bought into that kind of stove but did not want it in the center of the room.

United Nations level negotiation ended up with the wood stove 24 inches in front of the old fireplace and spun thirty degrees from square. That was so the heat radiating from the back of the stove reflected off the back wall and into the room rather than heating up the wall behind it.

The stove pipe ran up parallel to the fireplace chimney to within 12" of the ceiling and then "Teed" horizontally through the wall. Rich had learned that much of the heat thrown off by a wood stove is actually radiated from the stovepipe. The "tees" made it easy to clean the pipe.

The lethargy was a bit of a mystery until Rick was watching one of his TV shows, Live Below Zero. It was the episode when several of the characters affirmed that absolute need for fat in cold weather. It was a light bulb going off for Rick.

The other revelation was the food buckets. Rick had packed them with the intention of having them last one adult for one month. Extrapolating, it was far more realistic to plan on having them last 20 days and to include instant coffee or tea, bran, salt-and-pepper, vitamin tablets, a deck of cards, a paperback mystery and a minimum of three liters of oil.