Carl S. was a Vietnam vet and fanatical bow hunter. He owned 10 acres.  It was not much but it was his.

On the east side of his property he had a swamp hole.  Deer funneled through it as they moved from the oak woods to the north and east to the standing corn that was planted between his house and this stand.  It was a very productive place to put a tree stand.

It was about this time of year when Carl decided to pull the stand.  He generally left them through the winter but pulled them before the coons started szitting on them in the spring/summer/early fall.

Carl had been doing a little bit of maintenance through the winter.  It had been a winter like this one.  Much snow.  Much blowing and drifting.  He got out a few times and cut a few more shooting lanes and an access trail.  Carl kept rotating the lanes.  They would grow shut with brush and he simple found it easier to cut new ones through more mature growth.  There were fewer stems to cut and it went faster.

The pictures shown above are from my place but it is the same species that Carl was cutting, Cornus racemosa.  "Cornus" derives from "horn" as in "Unicorn" = an animal with one horn.  The genus earned this name by way of it exceedingly hard, white wood.

Carl's honeyhole was downwind of an open cornfield.  Snow blew in from the field and filled in the dogwood thickets with snow.  Carl is a bit like me.  He got impatient.  He did  not wait for the snow to melt.  Perhaps he had cabin fever.  He did his cutting when the snow was on the ground.

The fateful day that Carl chose to pull his treestand was in the middle of a week of freeze-thaw.  The days were warm and sunny.  The nights were cold.  It was maple sugar season.

Carl climbed the treestand ladder and undid the strap.  Carl said that he was leaning out to undo the strap, one of the ladder legs punched through the ice crust with an audible "Pop!"  In that instant, he knew something very bad was going down.  Carl had neglected to put on the lower, safety strap.

He intuitively calculated the trajectory.  He knew where he was going to land.  It was in the middle of a bed of 18" tall punji sticks.  Carl served in 'Nam as an E-5. Unlike many who went to Viet Nam, he spent significant time out in the pucker brush.  He knew more about punji sticks than any mortal ought ever know.

His screw-up is that he thought too quickly.  He dropped down right next to the trunk. 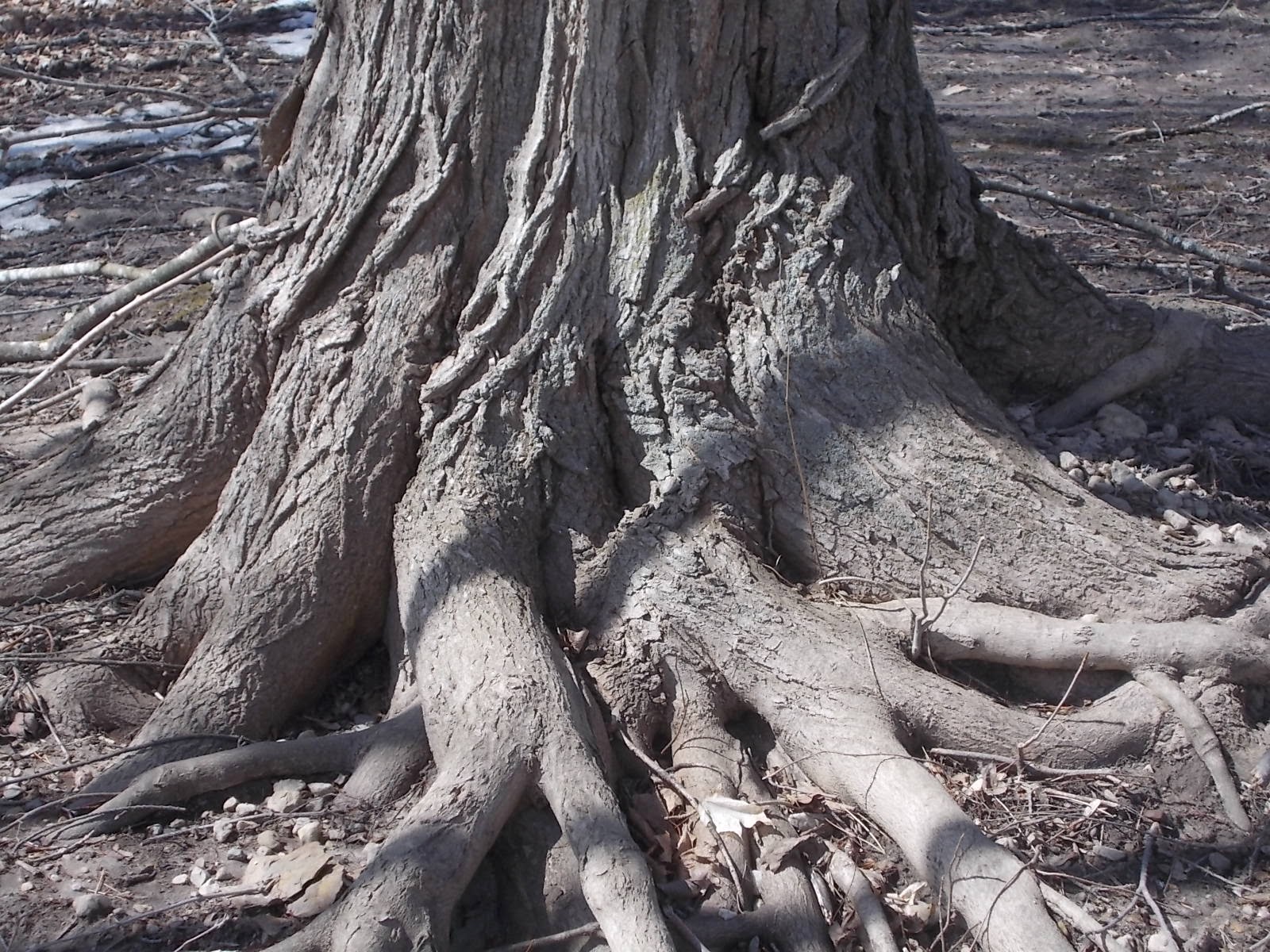 Trees that grow in swamps often have buttressed bases similar to this tree.  Carl landed on the base like a set of Jarts; pointy ends down.

After screaming until out of breath and wiping the tears from his eyes, Carl looked down and saw his feet sticking out sideways from his legs.

He crawled back home, out of the swamp, across the muddy corn field.  He dragged the phone off the counter by the wire.  He called 9-1-1.

The Orthopedic surgeon was amazed.  All of the bones that interlaced to form Carl's ankles had "unzipped" without breaking.  That is not uncommon with children.  Children's bones are like stiff rubber.  They are bendy.  Having the bones unzip is a rarity among adults because our bones are more highly mineralized and are more brittle.  For being unlucky, Carl had been very, very lucky.

The surgeons knitted and purled their way around each ankle and popped the end of each bone back into place.  Then they put him into rehab.

This is one of the stories I remember when I am out cutting brush.  Like Carl, I became impatient.  I just could not wait any longer.  It has been that kind of winter.  Looking at the Punji sticks I left behind gives me the heebie-jeebies.  I for darned sure keep my boot laces tied.  No way in heck do I want to trip.

Old man winter is not loosening his grip.  I just keep slipping further and further behind.
Posted by Eaton Rapids Joe at 2:23 PM